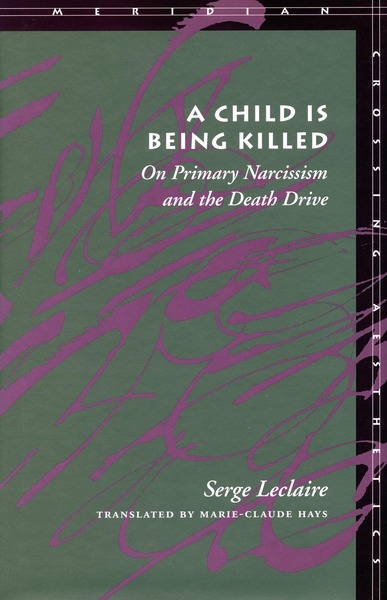 A Child Is Being Killed
On Primary Narcissism and the Death Drive
Serge Leclaire Translated by Marie-Claude Hays
SERIES: Meridian: Crossing Aesthetics

Winner of the 1999 Aldo and Jeanne Scaglione Prize for a Translation of a Scholarly Study of Literature, sponsored by the Modern Language Association.

The powerful thesis of this book is that in order to achieve full selfhood we must all repeatedly and endlessly kill the phantasmatic image of ourselves instilled in us by our parents. We must all combat what the author calls “primary narcissism,” a projection of the child our parents wanted. This idea—that each of us carries as a burden an unconscious secret of our parents, a hidden desire that we are made to live out but that we must kill in order to “be born”—touches on some of the fundamental issues of psychoanalytic theory. Around it, the author builds an intricate analysis of the relation between primary narcissism and the death drive.

Each of the book’s five chapters begins with one or more case studies drawn from the author’s clinical experience as a psychoanalyst. In these studies he links his central concern—the image of the child created by the unconscious desire of the parents—to other issues, such as the question of love, the concept of the subject, and the death drive. In the penultimate chapter, on transference, the author challenges the commonplace understanding of the analyst’s impassivity. What does such impassivity imply, especially in the context of a “transferential love” between a female patient and a male analyst? In replying to this question, the author forcefully reassesses the relation of psychoanalysis to femininity, to the question “What does a woman want?”

Serge Leclaire’s overarching thesis leads to a provocative rereading of the Oedipal configuration. Leclaire suggests that he is inhabited, pursued, haunted, and debilitated by the child who should have died in order that Oedipus might have been born into life.

Serge Leclaire was a practicing psychoanalyst in Paris and one of the first to join Lacan's school.