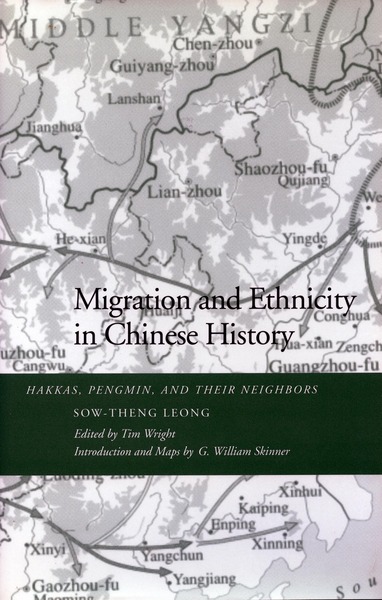 This book analyzes the emergence of ethnic consciousness among Hakka-speaking people in late imperial China in the context of their migrations in search of economic opportunities. It poses three central questions: What determined the temporal and geographic pattern of Hakka and Pengmin (a largely Hakka-speaking people) migration in this era? In what circumstances and over what issues did ethnic conflict emerge? How did the Chinese state react to the phenomena of migration and ethnic conflict?

To answer these questions, a model is developed that brings together three ideas and types of data: the analytical concept of ethnicity; the history of internal migration in China; and the regional systems methodology of G. William Skinner, which has been both a breakthrough in the study of Chinese society and an approach of broad social-scientific application. Professor Skinner has also prepared eleven maps for the book, as well as the Introduction.

The book is in two parts. Part I describes the spread of the Hakka throughout the Lingnan, and to a lesser extent the Southeast Coast, macroregions. It argues that this migration occurred because of upswings in the macroregional economies in the sixteenth century and in the late seventeenth and early eighteenth centuries. As long as economic opportunities were expanding, ethnic antagonisms were held in check. When, however, the macroregional economies declined, in the mid-seventeenth and late eighteenth centuries, ethnic tensions came to the fore, notably in the Hakka-Punti War of the mid-nineteenth century.

Part II broadens the analysis to take into account other Hakka-speaking people, notably the Pengmin, or “shack people.” When new economic opportunities opened up, the Pengmin moved to the peripheries of most of the macroregions along the Yangzi valley, particularly to the highland areas close to major trading centers. As with the Hakka, ethnic antagonisms, albeit differently expressed, emerged as a result of a declining economy and increased competition for limited resources in the main areas of Pengmin concentration.

"A fascinating story of migration, ethnic warfare, economic expansion and disintegration, technological and agricultural innovation, and political response over the course of over 1,000 years of Chinese history. . . . This is the kind of work that makes one appreciate how truly illuminating a work of painstaking scholarship can be. Not only should this work be required reading for anyone in the China field, but, in addition, it provides a model for anyone interested in the historical emergence of ethnic identities in other parts of the world as well. "

"Overall, this is an excellent book... a very important reminder to specialists on ethnicity in China that it is not only state-recognized minority nationalities who are worthy of research."