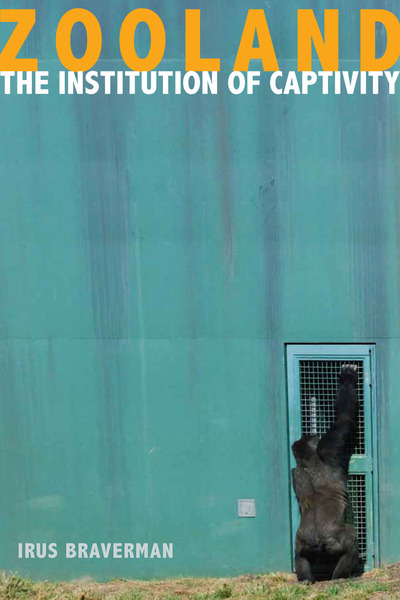 Zooland
The Institution of Captivity
Irus Braverman
SERIES: The Cultural Lives of Law

This book takes a unique stance on a controversial topic: zoos. Zoos have their ardent supporters and their vocal detractors. And while we all have opinions on what zoos do, few people consider how they do it. Irus Braverman draws on more than seventy interviews conducted with zoo managers and administrators, as well as animal activists, to offer a glimpse into the otherwise unknown complexities of zooland.

Zooland begins and ends with the story of Timmy, the oldest male gorilla in North America, to illustrate the dramatic transformations of zoos since the 1970s. Over these decades, modern zoos have transformed themselves from places created largely for entertainment to globally connected institutions that emphasize care through conservation and education.

Zoos naturalize their spaces, classify their animals, and produce spectacular experiences for their human visitors. Zoos name, register, track, and allocate their animals in global databases. Zoos both abide by and create laws and industry standards that govern their captive animals. Finally, zoos intensely govern the reproduction of captive animals, carefully calculating the life and death of these animals, deciding which of them will be sustained and which will expire. Zooland takes readers behind the exhibits into the world of zoo animals and their caretakers. And in so doing, it turns its gaze back on us to make surprising interconnections between our understandings of the human and the nonhuman.

Irus Braverman is Associate Professor of Law and Adjunct Professor of Geography at the University at Buffalo, SUNY. She is the author of Planted Flags: Trees, Land, and Law in Israel/Palestine (2009).

"Braverman's Zooland engages with the new zoos of the 21st century. It is an innovative book, adding a new chapter to understanding how zoos evolve . . . Drawing upon Foucault, Braverman's ethnography of North American zoos presents an innovative, bold, and in-depth study of how zoos are conceived, managed, organized, spatialized, recorded, managed, and governed."

"Zooland: The Institution of Captivity views the history of American zoos through a different lens, relating the history of animal regulation and government to Michel Foucault's discussion of panopticon and pastoral power . . . Braverman's treatment of the history and the practice of modern zoos is comprehensive in both its research and presentation . . . [W]ith this Foucaultian approach it is certainly appropriate to apply the ideas of both the panopticon and pastoral power to the care of captive animals. This book provides a detailed perspective on the pertinent issues facing the modern zoological park."

"This book is a timely addition to the growing literature on zoos and human-animal relations . . . [T]here is much [in this book] to interest anthropologists . . . [I]t is a study that deserves to be taken seriously . . . [T]his book may garner as much interest from anthropologists and scholars of governance and institutional life and from those interested in regimes of value and property. It is also, I believe, a text that will help engage students in the kinds of anthropological questions these areas of inquiry aim to provoke."

"Irus Braverman's recent book Zooland is a wonderful read on a topic that is of both historical and current interest—zoos . . . Braverman does an admirable job of walking the line between zoo advocacy and condemnation and tracing an important historical and cultural shift in the self-understandings of those involved in the increasingly bureaucratized and professionalized institutional care and control of zoo animals. One gets a sense from the book and the voices of her interview subjects that zoo professionals really do care about these animals . . . The book puts forward their perspective fairly and with a great deal of compassion. On the other hand, it is steadfast in highlighting the contradictions and problems with zoo messaging that many of us have experienced and have probably only dimly perceived on a visit to our local zoo."

—Angela Fernandez, Jotwell: The Journal of Things We Like (Lots)

"The book's most striking chapters go beyond animal bodies to consider zoo databases, regulations, and the new technologies that bring animal bodies into being. Braverman's exploration of the backstage practices of zooland makes for fascinating reading . . . Zooland stands as an admirable achievement and a welcome addition to the literature on zoos, as well as showing how biopolitics encompass more than human life. Braverman's research really gets to the heart of the paradox that the institution of captivity is an expression of care, even if that care justifies death and suffering."

"[Zooland] builds a thorough depiction of the history and contemporary work and goals of zoos and explores the nature of wildness, care, and power by interviewing zoo professionals, animal rights activists, and others, as well as diving into a wide range of legal and scholarly literature from fields as diverse as geography, sociology, animal sciences, and philosophy."

"[Zooland] gives a glimpse of zoos, in the same way that zoos give a glimpse of nature: a quick look behind the scenes, at a slightly upward angle, inspiring respect."

"Zoos can provide a valuable service to society, but the pursuit of profit has their own drawbacks. Zooland: The Institution of Captivity explores the modern state of the zoo, as forces within the community paint two very different pictures: the zoo has a preserver and educator on the topic of wildlife, and zoo as the carnival, exploiting animals for profit. With sixty interviews with many people voicing their ideas on the topic, Zooland is scholarly and much recommended addition to any wildlife and social issues collection."

"Irus Braverman has written a wonderful monograph that explores the operation of zoos—institutions that manage to be utterly familiar while retaining an aura of mystery. It will undoubtedly be a popular addition to many academic disciplines."

"Irus Braverman has written a very important book about zoos. Her Zooland: The Institution of Captivity is a penetrating and insightful study of the business of zoos. It will serve as a basic reference and should be in the personal library of everyone interested in zoos."

"Shifting the focus away from strategies of visual display does not mean abandoning vision as one of the zoo's central themes and regulating principles, as Braverman's study clearly demonstrates . . . To explain how care and power are entangled in the surveillance practices of zoo managers, she deploys a concept of pastoral power adapted from Michel Foucault's later work. Pastoral power for Braverman is distinguished by three characteristics: its focus on care, its interest in managing populations and its concern for the individuals that make up those populations."

"Zoos have increasingly become an interconnected network of spaces in which animal populations can be managed and sustained despite the threats they face in the wild. This network is the 'Zooland' of the book's title, and its advocates portray it as a kind of Noah's Ark, 'containing the animals safely until the storm passes'. This is the essence of how modern zoos see themselves, one distilled by Braverman, a scholar of law and geography, in interviews with more than 70 zoo administrators and activists from both sides. Zooland is an insightful catalogue of zoos' claims and contradictions."

"[Braverman's] accounts of record keeping, a fairly new practice, and the laws regulating the keeping of zoo animals as well as the complexity of deciding which animals will be allowed to reproduce, will be eye opening for most readers."

—Donna Haraway, University of California at Santa Cruz, author of When Species Meet

"Brave and important, this new work puts the governance of animals at the heart of the debates about governance more broadly. Zooland opens up our understandings of social and spatial management, surveillance, classification and control, helping us understand the impact of such human social processes on nonhumans."

"Deeply engaging and highly creative, Zooland brings us into a place of manufactured ecologies and microprocessed beings. Braverman offers important insights into the deeply folded architectures of human-animal relations and the complex, multidimensional spaces of the zoo."

"Zoos have undergone dramatic transformations in recent decades, and their fundamental purpose and value—to animals and human visitors alike—remain hotly debated. With Zooland Braverman enters the fray, giving voice to the various sides while providing her own informed, thoughtful stance. Arguing for a 'power of care,' Braverman moves us toward the possibility of zoos that combine concern for individual welfare and the conservation of species."

"Irus Braverman's beautifully nuanced Zooland: The Institution of Captivity is an excellent opportunity for readers . . . to engage with the issue of zoos and captivity in a new way." 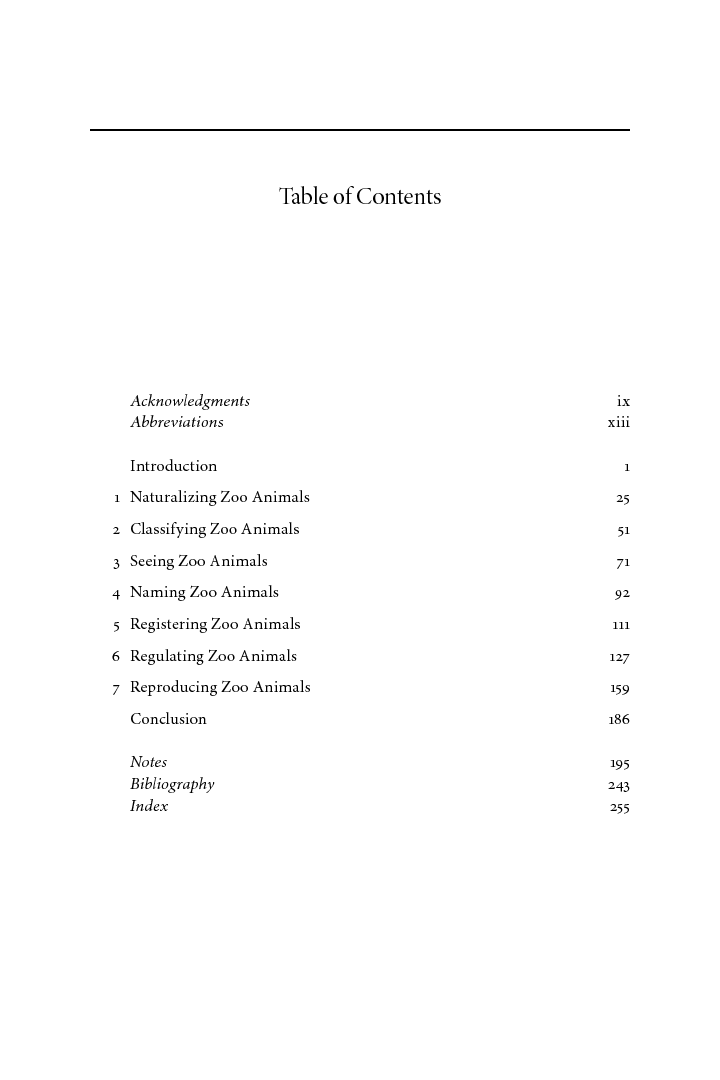 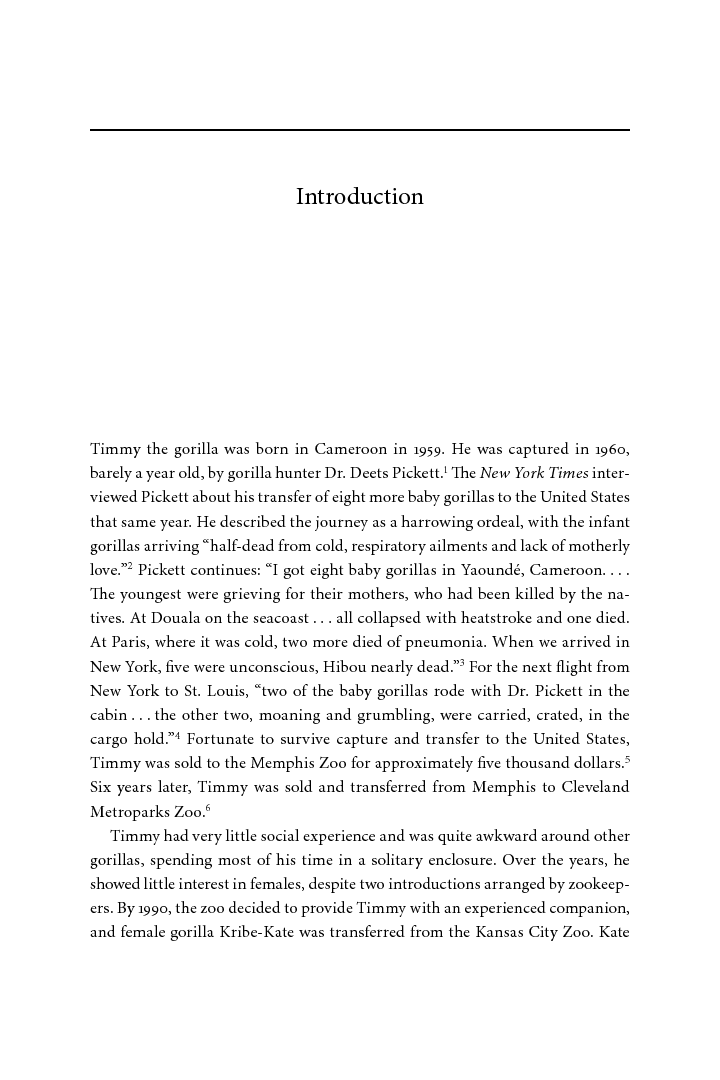 The Disturbing Truth About Where Zoo Animals Come From