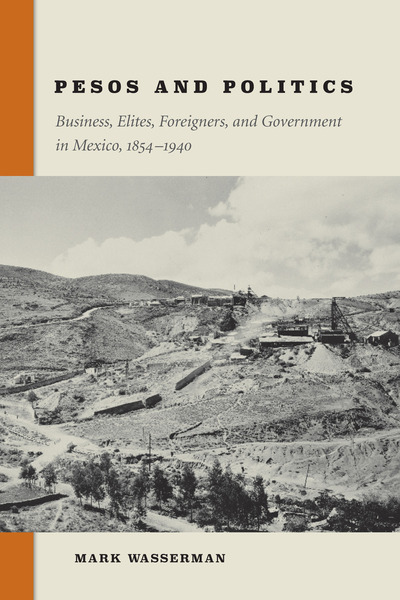 The relationship between business and politics is crucial to understanding Mexican history, and Pesos and Politics explores this relationship from the mid-nineteenth century dictatorship of Porfirio Diaz through the Mexican Revolution (1876–1940). Historian Mark Wasserman argues that throughout this era, over the course of successive regimes, there was an evolving enterprise system that had to balance the interests of the Mexican national elite, state and local governments, large foreign corporations, and individual foreign entrepreneurs. During and after the Revolution these groups were joined by organized labor and organized peasants.

Contrary to past assessments, Wasserman argues that no one of these groups was ever powerful enough to dominate another. Because Mexican governments and elites committed themselves to economic models that relied on foreign investment and technology, they had to reach a balance that simultaneously attracted foreign entrepreneurs, but did not allow them to become too powerful or too privileged.

Concentrating on the three most important sectors of the Mexican economy: mining, agriculture, and railroads, and employing a series of case studies of the careers of prominent Mexican business people and the operations of large U.S.-owned ranching and mining companies, Wasserman effectively demonstrates that Mexicans in fact controlled their economy from the 1880s through 1940; foreigners did not exploit the country; and, Mexicans established, sometimes shakily, sometimes unplanned, a system of relations between foreigners, elite and government (and later unions and peasant organizations) that maintained checks and balances on all parties.

Mark Wasserman is Professor of History and Chair of the Department of History at Rutgers, The State University of New Jersey.

"Rutgers historian Wasserman's thesis is that the relationship between business and politics is crucial to understanding Mexican history; he explores this relationship from the dictatorship of Porfirio Diaz through the Mexican Revolution . . . Recommended."

"This is the best economic history available for Mexico in the years 1854 to 1940. The scholarship is impeccable, with scrupulous research in both Mexican and US archives, private collections, and published material, the analysis is logical, careful, and consistent, and the writing is clear, accessible, and to the point."

"The central hypothesis—the creation and function of an interactive, mutually-balancing and mutually-reinforcing 'elite-foreign enterprise system' in operation over the period under discussion—is an important and convincing contribution to the field, and one which challenges both conventional wisdom and 'traditional' historiography. It issues an important corrective to recent interpretations, which have sought to underestimate the role of the state in promoting enterprise and economic development."

"Wasserman has produced a valuable contribution to the historiography of Mexico's commercial sector in the late nineteenth and early twentieth centuries. His arguments are well-evidenced and clearly-articulated through prose that is sophisticated yet accessible. His meticulous research in US and Mexican archives and special collections is unrivaled and allows his work to challenge existing paradigms of control, exploitation, and foreign participation in the Mexican economy....This study will no doubt become required reading for graduate students in Mexican and Latin America history, and compel many of us to revise our course content on Mexico between 1880 and 1940."