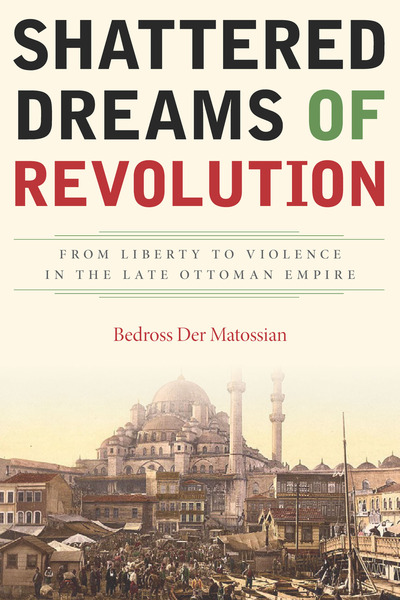 Winner of the 2017 SAS Outstanding Book Award sponsored by the Society for Armenian Studies.

The Ottoman revolution of 1908 is a study in contradictions—a positive manifestation of modernity intended to reinstate constitutional rule, yet ultimately a negative event that shook the fundamental structures of the empire, opening up ethnic, religious, and political conflicts. Shattered Dreams of Revolution considers this revolutionary event to tell the stories of three important groups: Arabs, Armenians, and Jews. The revolution raised these groups' expectations for new opportunities of inclusion and citizenship. But as post-revolutionary festivities ended, these euphoric feelings soon turned to pessimism and a dramatic rise in ethnic tensions.

The undoing of the revolutionary dreams could be found in the very foundations of the revolution itself. Inherent ambiguities and contradictions in the revolution's goals and the reluctance of both the authors of the revolution and the empire's ethnic groups to come to a compromise regarding the new political framework of the empire ultimately proved untenable. The revolutionaries had never been wholeheartedly committed to constitutionalism, thus constitutionalism failed to create a new understanding of Ottoman citizenship, grant equal rights to all citizens, and bring them under one roof in a legislative assembly. Today as the Middle East experiences another set of revolutions, these early lessons of the Ottoman Empire, of unfulfilled expectations and ensuing discontent, still provide important insights into the contradictions of hope and disillusion seemingly inherent in revolution.

Bedross Der Matossian is Assistant Professor of History at the University of Nebraska-Lincoln.

"Taking a macro-historical approach, Matossian's work includes various regions of the Ottoman Empire . . . Matossian argues that the ideal of creating an Ottoman identity which would unite the diversity of ethnic groups under one banner is paradoxical . . . [Shattered Dreams of Revolution has a] valuable contribution to the literature of Second Constitutional Period as they shed light on the very first constitutional experience of the Middle Eastern communities."

"Der Matossian's work is an important and in many ways path-breaking contribution that moves our understanding of the political history of the non-Muslim and non-Turkish speaking populations of the Ottoman Empire forward beyond the tried and tired tropes of the rise of separatist nationalisms and the meddling of the Great Powers . . . In the span of less than three hundred pages, Der Matossian provides an expansive snapshot of the multiplicity of actors and of the interplay of competing interests that sometimes—but by no means always—crossed over lines of religion and ethnicity to shape politics in the empire's waning years."

"In this well-researched, tightly argued, and sophisticated book, Bedross Der Matossian maintains that the enormous chasm between the Weltanschauungen of the Ottom Committee of Union and Progress and of the major Armenian, Jewish, and Arab political organizations and intellectuals made any agreement on the basic tenets of the new constitutional regime impossible . . . [S]tudents of Ottoman, Armenian, Arab, and modern Jewish history will be indebted to Der Matosian for his extremely valuable contribution to the field."

"Shattered Dreams of Revolution is a timely book and a meticulously researched work. It locates itself in the growing field of the history of Ottoman ethnic and religious minorities, or as Der Matossian rightly prefers to refer to them, the non-dominant groups, in the nineteenth and early twentieth century . . . Shattered Dreams is a grappling book, an academic work of extremely high standard, which boasts impeccable and meticulous archival research in a number of languages. It is a book that sheds light on the very complicated last crucial years of the pre-war Ottoman Empire."

"Bedross Der Matossian brings a valuable contribution to our understanding of both modern revolutions and late Ottoman history . . . The real value of Shattered dreams of revolution lies in providing a new perspective on the contemporary drama of the Middle East, by grounding its roots firmly in the region's history, revolutionary process promising freedom and equality but eventually leading to inter-community violence, a situation which strongly echoes the current state of affairs in the region."

"[T]his book is an important contribution to research on the period following the Young Turk Revolution, which deserves our attention. It highly contributes to current discussions and surely will raise new ones."

"[N]o historian has approached the subject of non-dominant ethnic groups in such a comprehensive and multilingual manner as Der Matossian has done in this volume. His study of Ottoman Armenians, Arabs, and Jews in the immediate aftermath of the revolution outlines the complex nature of post-revolutionary politics and the lack of homogeneity within each of these groups . . . Highly recommended."

"Shattered Dreams of Revolution is a compelling work on the Ottoman revolution of 1908 and its shortcomings . . . [T]his work must be commended for presenting a fresh picture of the revolution as a key event that needs to be more fully studied for its repercussions on the collapse of the Ottoman Empire. This is a work that cannot be ignored by those studying late Ottoman history and in particular how nationalism impacted the empire's subjects."

"In Shattered Dreams of Revolution: From Liberty to Violence in the Late Ottoman Empire, historian Bedross Der Matossian addresses the fraught ethnic relations that played a significant role in the failure of the Ottoman constitutional experiment . . . Der Matossian has sought out primary sources—including newspapers, political communications, speeches, and religious sermons—which help to paint a picture of late Ottoman society unavailable in official repositories like the Ottoman Archives . . . Der Matossian's ambitious project breaks sharply from the 'microhistorical' approach employed by many scholars of the period . . . These parallels make Shattered Dreams of Revolution essential to a sober and honest understanding of the Middle East in the 20th century—and in the 21st."

"The sad fate of revolutions, from moments of euphoria and hope through the descent into authoritarianism, has seldom been told as persuasively as in this unique book. Bedross Der Matossian offers the stories of three peoples—Armenians, Arabs, and Jews—who greeted the 1908 Young Turk revolution with joy and optimism, only to find their expectations of liberation and modernity quickly turn into disillusion and brutal bloodletting."

"Bedross Der Matossian's research is a model for those interested in a multivocal treatment of the principal historiographical issues of the late Ottoman period. This is is a readable work written in a style accessible to casual readers and students, and with its detailed and extensive use of evocative quotations, Shattered Dreams of Revolution should prove a fascinating read for specialists as well."

"[A] recent work by Bedross Der Matossian is valuable, for it proposes a different analogy to the Arab spring and thus casts new light on the present. Shattered Dreams of Revolution" From Liberty to Violence in the Late Ottoman Empire is above all a work of historical scholarship, but it also makes a compelling case for looking at the Arab spring in light of the Young Turk revolution - which began with a military cou d'etat - in the Ottoman empire in 1908."

"Der Matossian's Shattered Dreams of Revolution: From Liberty to Violence in the Late Ottoman Empire, stands out among the plethora of volumes on the events surrounding the Young Turk Revolution, as it looks at the revolution through the lenses of three nondominant groups in the empire - Armenians, Jews, and Arabs. Drawing upon a rich body of sources in at least five languages (Ottoman Turkish, Armenian, Arabic, Hebrew, and Ladino), the author provides the reader with a much richer understanding of the dynamics that brought about the revolution of 1908, as well as the postrevolutionary, counterrevolutionary, and subsequent dynamics than many other studies that have taken the Committee of Union and Progress as their primary lens of analysis."

"This richly textured narrative addresses the alliances of convenience brokered between mutually opposing Armenian political parties out of exigency...Shattered Dreams of Revolution is an indispensable reference work for historians of the late Ottoman Empire. The precise, accessible language makes it suitable for adoption in undergraduate curricula."

"Bedross Der Matossian explains with new historical evidence why and how the Young Turk revolution ultimately failed to attract Armenians, Jews, and Arabs to its cause. He makes a genuine contribution to our understanding of ethno-religious conflict and nationalism, suggesting interesting parallels with the failings of today's Middle East revolutions."

"This is a masterly account of the Young Turk Revolution as experienced, understood, negotiated, and presented by different non-dominant ethno-religious groups (Arabs, Armenians, and Jews) that constituted part of the Ottoman conglomerate. By using wide-ranging sources, the book provides a wealth of fascinating insights and comparative intra-communal and cross-cultural analysis of the dramatic shift from 'the euphoria of the Revolution' to the fast ensuing disillusionment and deterioration of inter-communal relations. Few scholars have devised such a stimulating and a multi-vocal framework for understanding the post-1908 realities that shaped the last Ottoman decade. As such it represents a major contribution to the study of the Young Turk period and its impact on the non-dominant ethno-religious groups."

"[This book] is a well focused, well written and innovative comparative contribution to the field of the Second Constitutional Period in late-Ottoman Turkey. All those interested in the question [of] why the first attempt to achieve democratic constitutionalism failed in the Middle East a hundred years ago will greatly profit from this fine study."

"Shattered Dreams of Revolution is a book with significant strengths [Der Matossian's] careful investigation of the internal politics of the Arab, Armenian, and Jewish communities of the time challenges narratives that depict these groups as monolithic entities and underestimate their active participation in post-revolutionary politics."

"In the introduction to this timely and well-researched study of the Ottoman Constitutional Revolution of 1908 and its aftermath, Bedross Der Matossian insists on defining the three groups under study as "ethnic" as opposed to "national" collectives . . . Perhaps the greatest achievement of Der Matossian's fine study is that it brings to life the multiple voices of some of the most important of these ethnic groups where others have tended to lump them together en bloc"

—Benjamin C. Fortna, Bulletin of the School of Oriental and African Studies

"[T]he book is a major contribution to the scholarship of the late Ottoman Empire, and is written in a very accessible style. It will be of great use to scholars interested in the history of the Ottoman Empire, and Jewish, Armenian and Arab history, as well as to those interested in the topic of non-Muslim and non-Turkish populations in the Middle East in general. It is also highly recommended to anyone working on later periods of the modern Middle East"

New Texts Out Now: Bedross Der Matossian, Shattered Dreams of Revolution: From Liberty to Violence in the Late Ottoman Empire