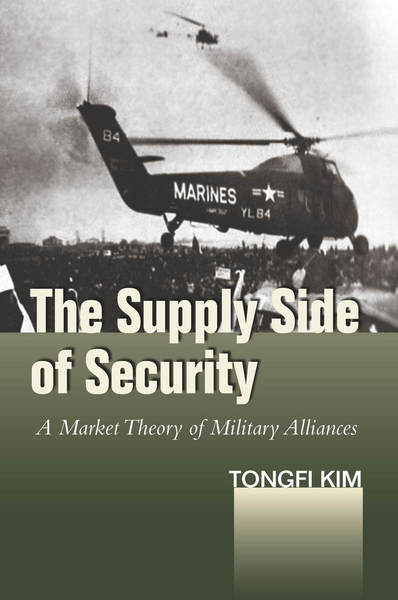 The Supply Side of Security
A Market Theory of Military Alliances
Tongfi Kim
SERIES: Studies in Asian Security

The Supply Side of Security conceptualizes military alliances as contracts for exchanging goods and services. At the international level, the market for these contracts is shaped by how many countries can supply security.

Tongfi Kim identifies the supply of policy concessions and military commitments as the main factors that explain the bargaining power of a state in a potential or existing alliance. Additionally, three variables of a state's domestic politics significantly affect its negotiating power: whether there is strong domestic opposition to the alliance, whether the state's leader is pro-alliance, and whether that leader is vulnerable. Kim then looks beyond existing alliance literature, which focuses on threats, to produce a deductive theory based on analysis of how the global power structure and domestic politics affect alliances. As China becomes stronger and the U.S. military budget shrinks, The Supply Side of Security shows that these countries should be understood not just as competing threats, but as competing security suppliers.

"Tongfi Kim adds to recent literature on alliance dependability, breakup, signalling, and deterrence effectiveness with his market theory of alliances. The application of mainstream international relations theory to Asia is welcome, given that the U.S. alliance system in this region will play such a critical role in contending with China's enlarging footprint."

"Tongfi Kim's book is a welcome addition to alliance scholarship. Kim examines how systemic and domestic factors influence bargaining among allies and the evolution of alliances over time. Given the importance of key bilateral alliances to Asian security, Kim's theory will be particularly relevant for those interested in East Asia."