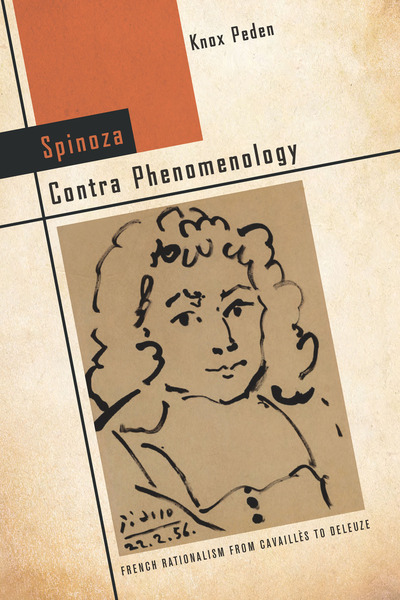 Spinoza Contra Phenomenology fundamentally recasts the history of postwar French thought, typically presumed to have been driven by a critique of reason indebted to Nietzsche and Heidegger. Although the reception of phenomenology gave rise to many innovative developments in French philosophy, from existentialism to deconstruction, not everyone in France was pleased with this German import. This book recounts how a series of French philosophers used Spinoza to erect a bulwark against the nominally irrationalist tendencies of phenomenology. From its beginnings in the interwar years, this rationalism would prove foundational for Althusser's rethinking of Marxism and Deleuze's ambitious metaphysics. There has been a renewed enthusiasm for Spinozism of late by those who see his work as a kind of neo-vitalism or philosophy of life and affect. Peden counters this trend by tracking a decisive and neglected aspect of Spinoza's philosophy—his rationalism—in a body of thought too often presumed to have rejected reason. In the process, he demonstrates that the virtues of Spinoza's rationalism have yet to be exhausted.

Knox Peden is an Australian Research Council Fellow in the School of Philosophy at the Australian National University.

"It's rare to finish a book in the history of philosophy and say to oneself that it's indispensable for an adequate understanding of the period and the context that it deals with. But for those who have a serious interest in Spinoza's reception or even in the history of French philosophy in the twentieth century, Peden's book certainly belongs in this category."

"Knox Peden's Spinoza Contra Phenomenology is now the definitive statement on what it meant for some of French philosophy's most influential 20th century thinkers to begin, in Hegel's words, 'at the standpoint of Spinozism' . . . [I]t is an enviable work of scholarship, both massive in its intellectual scope and nuanced in its attention to detail. For those interested in 20th century French intellectual history, Spinoza Contra Phenomenology is sure to become essential reading."

"[I]t is exhilarating to think along with Peden. In Peden's hands, Spinozism becomes a powerful tool for critique: it is not the Spinoza of substance monism but of an 'essentially critical rationalism' that the author wields with finesse to ferret out unwarranted ontological claims, deflating arguments that would seek to derive a politics from Spinoza's metaphysics."

"Peden provides a dramatic and compelling retelling of the intellectual history of postwar France. Instead of the familiar succession of existentialism, structuralism, and post-structuralism, Peden sees a set of variations of a fundamental struggle between two radically opposed ways of thinking."

"Peden's work is to be praised for drawing these philosophers to our attention, and for providing what will hopefully be a spur to further research. In addition, he provides interesting readings of more familiar figures which draw our attention to aspects of their work that have not previously received sufficient scholarly attention . . . Knox Peden has written a well-researched and well-argued book, which makes a meaningful contribution to our understanding of twentieth-century French philosophy. It is essential reading for those working in this area, as well as for any English-speaking philosophers whishing to purge themselves of unhelpful preconceptions they may well have inherited concerning philosophy in France in the twentieth century."

—David J. Allen, British Journal for the History of Philosophy

"Not only does [Spinoza Contra Phenomenlogy] contribute excellent biographical sketches of the less well known figures of Jean Cavaillès, Martial Gueroult, Ferdinand Alquié, and Jean-Toussaint Desanti; it effectively reveals the world that shaped them, and their effect on the conceptual universe of continental philosophy today . . . One cannot do justice here to Peden's rich discussion of Cavaillès' work on mathematics and set theory."

"Peden offers an important book that seeks to challenge the dominant narrative that 20th-century French philosophy was in large part a series of responses to developments in post-Kantian German philosophy . . . [P]hilosophers and intellectual historians will find that this carefully researched book offers much to learn. An important acquisition for academic libraries building collections in 20th-century European philosophy . . . Summing Up: Highly Recommended."

"In this signal contribution to the study of European thought, Knox Peden shows that the importation of German phenomenology to France in the twentieth century was only part of the story. In appealing to Benedict Spinoza's version of rationalism, neglected figures whom this book restores to their centrality made conceptual moves of lasting importance, setting a context for the careers of Louis Althusser and Gilles Deleuze, with which Peden's absorbing reinterpretation culminates. Thanks to his sure grasp of the theoretical materials and ability to address them in lucid writing, Spinoza Contra Phenomenology redraws the map, not simply for the sake of having a better one, but because debates across the contemporary humanities need its orientation."

"The conventional understanding of twentieth-century French thought is just beginning to fracture, and we are now coming to appreciate the complexity and significance of intellectual trends that once-dominant schools—such as phenomenology and existentialism, structuralism and post-structuralism—have too long obscured. In this brilliant new study, Knox Peden breaks free of received wisdom to cast a new light on the movement of French philosophical rationalism that borrowed both its energies and its name from the metaphysical writings of a seventeenth-century heretical Jew. Spinozism, as reimagined in France by heterodox intellectuals such as Althusser and Deleuze, was something more than a philosophy: it was a veritable ethos. With verve and sophistication, Peden maps this inheritance and guides us through the formidable debates that have not yet reached their end."

"Spinoza Contra Phenomenologyis a serious and important endeavor, and it is perhaps not for the faint of philosophical heart. But for those interested in either Spinozism or developments in twentieth-century French thought, the book should be necessary reading." 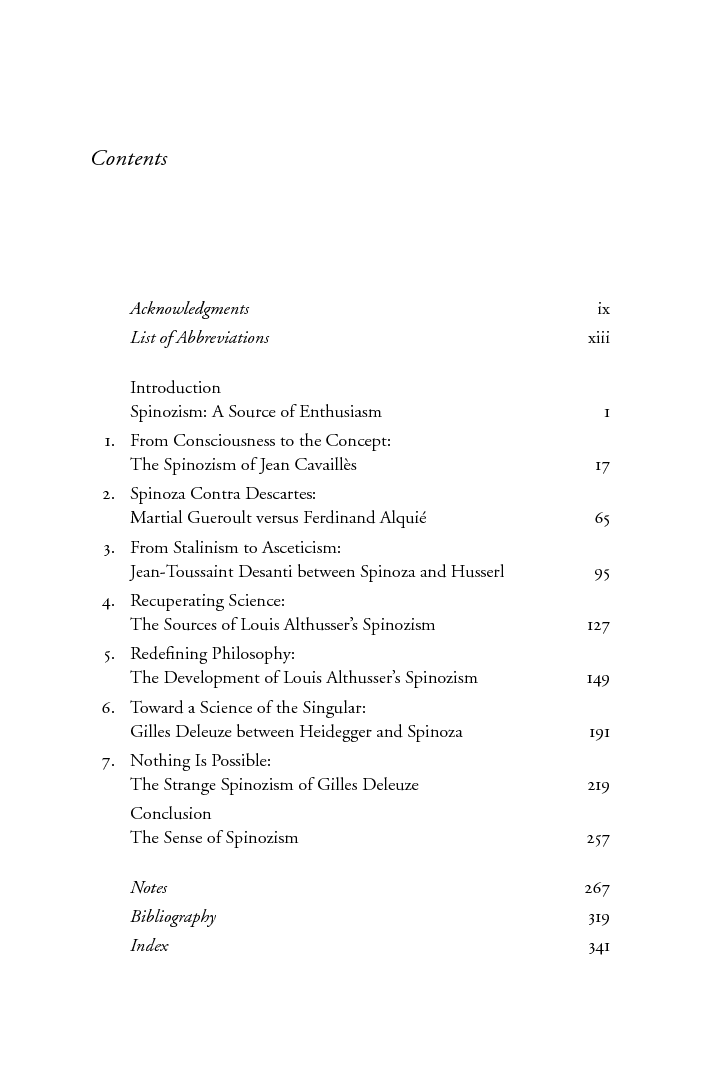 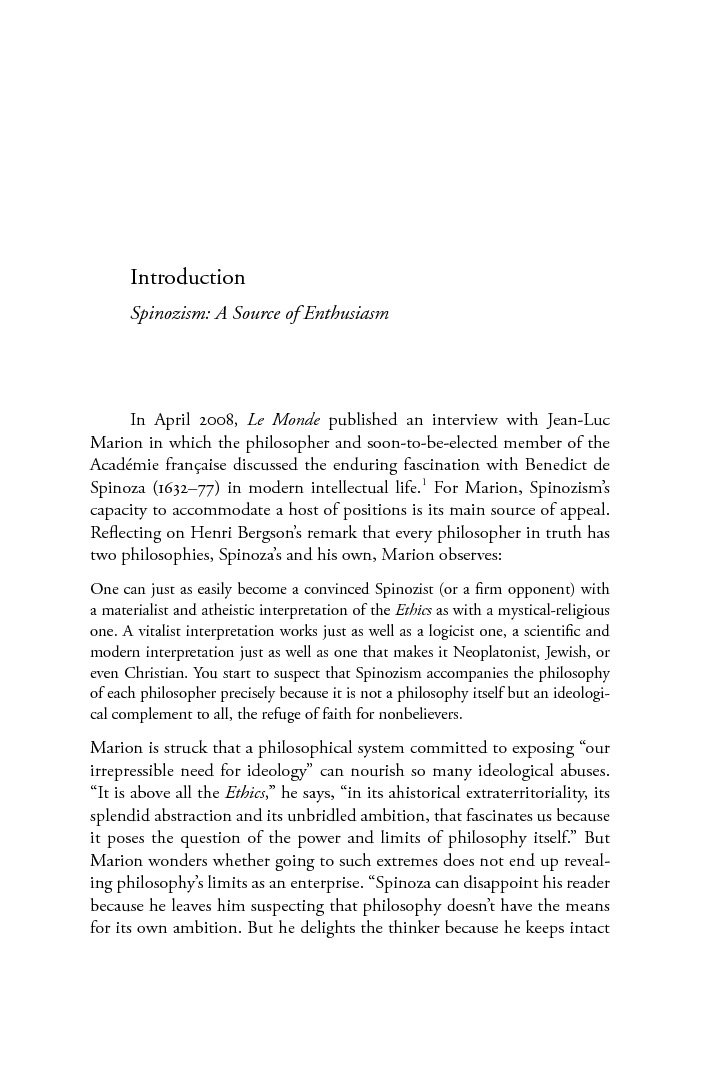