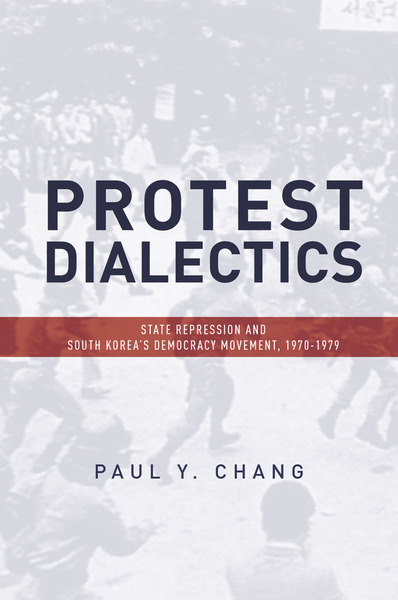 1970s South Korea is characterized by many as the "dark age for democracy." Most scholarship on South Korea's democracy movement and civil society has focused on the "student revolution" in 1960 and the large protest cycles in the 1980s which were followed by Korea's transition to democracy in 1987. But in his groundbreaking work of political and social history of 1970s South Korea, Paul Chang highlights the importance of understanding the emergence and evolution of the democracy movement in this oft-ignored decade.

Protest Dialectics journeys back to 1970s South Korea and provides readers with an in-depth understanding of the numerous events in the 1970s that laid the groundwork for the 1980s democracy movement and the formation of civil society today. Chang shows how the narrative of the 1970s as democracy's "dark age" obfuscates the important material and discursive developments that became the foundations for the movement in the 1980s which, in turn, paved the way for the institutionalization of civil society after transition in 1987. To correct for these oversights in the literature and to better understand the origins of South Korea's vibrant social movement sector this book presents a comprehensive analysis of the emergence and evolution of the democracy movement in the 1970s.

"This important book gives the 1970s democratization movement in South Korea the recognition it deserves. Chang shows that while the working-class movement was certainly a vital element, Christians and white-collar workers, particularly lawyers and journalists, gave rise to the discourse of human rights, forming the moral backbone of the democratization movement."

"For all the high drama of movements at the peak of their mobilizing power, the seeds of these struggles almost invariably are sown earlier. The singular contribution of Paul Chang's book on the South Korean Democracy movement during the neglected decade of the 1970s is to lay bare those seeds like no scholar before him."

"Protest Dialectics shows how the dramatic protest of the 1960s transformed during the repressive era of 1970s South Korea, establishing a foundation for effective activism. Chang offers new insight into how democracy movements find ways to continue in hard times, and to reemerge when circumstances change. To understand democratic transitions, we must pay attention to long struggles for reform, even when effective action seems unlikely."

"The book makes a strong contribution to the study of mobilization by demonstrating how repression can work while simultaneously inducing movement diversification and survival. Chang's pairing of quantitative and qualitative data show that protest counts are an insufficient indication of repression's effects on collective resistance. The findings also have important implications for the study of dissent under authoritarianism: as regimes become stronger and more repressive, they can also render civil society more contentious. Chang deserves praise for his highly readable rendering of the complex events at hand."

The Polarization of South Korea