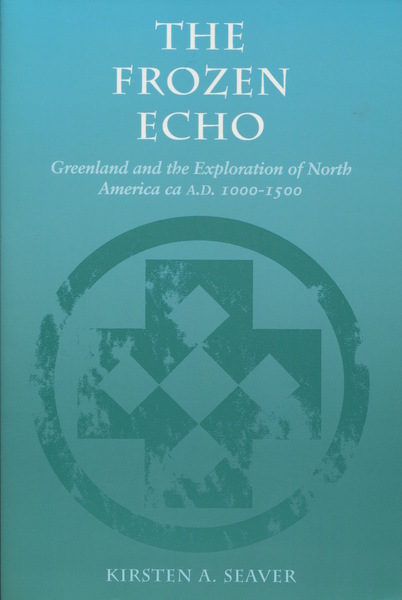 The Frozen Echo
Greenland and the Exploration of North American, ca. A.D. 1000-1500
Kirsten A. Seaver

It is now generally accepted the Leif Eriksson sailed from Greenland across the Davis Strait and made landfalls on the North American continent almost a thousand years ago, but what happened in this vast area during the next five hundred years has long been a source of disagreement among scholars. Using new archeological, scientific, and documentary information (much of it in Scandinavian languages that are a bar to most Western historians), this book confronts many of the unanswered questions about early exploration and colonization along the shores of the Davis Strait.

The author brings together two distinct but tangential fields of inquiry: the history of medieval Greenland and its connections with the Norse discovery of North America, and fifteenth-century British maritime history and pre-colonial voyages to North America, including that of John Cabot. In order to evaluate the situation in Norse Greenland at the end of the fifteenth century (when documented English and Portuguese voyages of northern exploration began), the author follows the colony's development—its domestic economy and foreign trade and its cultural and ecclesiastical affinities—from its inception in the tenth century. In the process, she looks critically at commonly held views that have gone unchallenged until now.

Among the questions about which the author sets forth new evidence and conclusions are: the extent to which Greenlanders explored and exploited North America after Leif Eriksson, the reasons for the baffling disappearance of the Norse settlement in Greenland, the connection between their disappearance and the beginning of the voyages of exploration that began around A.D. 1500, the routes by which information concerning previous voyages traveled, the history before Cabot of the advance of English fishing fleets from Icelandic waters to the coasts of Labrador, and the influence of the roman Catholic Church on Norse Greenland.

Kirsten A. Seaver is the translator of the nineteenth-century Norwegian novel The district Governor's Daughter, by Camilla Collett.

"This is a fascinating book, not only for those engaged in Atlantic studies or early American history. The clear and precise text, the skillful management of complex themes, and above all the sympathetic approach to human endeavors, coupled with a skeptical view of earlier theories and an open mind to new ideas, make it as easy to read as a novel."

"Of major importance, this book fills a serious gap in scholarly studies of European expansion. It brings new understandings to the relationships between Norse discoveries and the great voyages of Renaissance discovery in the North Atlantic. Furthermore, it is fascinating reading, written in a lively and very readable style. It should interest the general public and amateur historians as well as scholars."

"For many aspiring writers, this book might well be a model of how to put across a complex theme in an easy-to-read manner. It is sure to provide much new information even to those who specialize in the North Atlantic, and provide topics for discussion, disagreement, and thought, as any well-researched book should do."