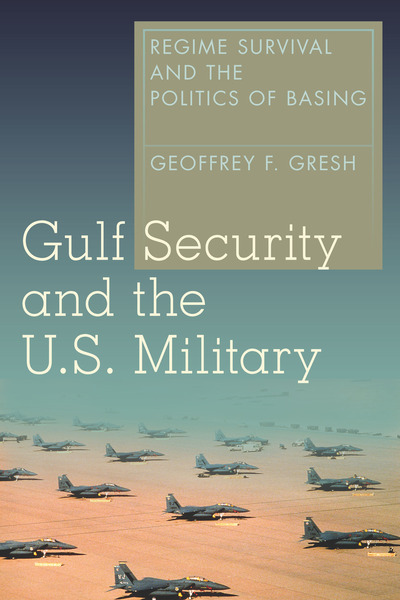 Gulf Security and the U.S. Military
Regime Survival and the Politics of Basing
Geoffrey F. Gresh

The U.S. military maintains a significant presence across the Arabian Peninsula but it must now confront a new and emerging dynamic as most Gulf Cooperation Council countries have begun to diversify their political, economic, and security partnerships with countries other than the United States—with many turning to ascending powers such as China, Russia, and India. For Gulf Arab monarchies, the choice of security partner is made more complicated by increased domestic and regional instability stemming in part from Iraq, Syria, and a menacing Iran: factors that threaten to alter totally the Middle East security dynamic.

The analysis of the cases offers a fresh perspective on how the United States has adapted to sometimes rapidly shifting Middle East security dynamics and factors that influence a host nation's preference for eviction or renegotiation, based on its perception of internal versus external threats.

Geoffrey F. Gresh is an Associate Professor at the National Defense University in Washington, D.C.

"In Gulf Security and the US Military, Geoffrey F. Gresh makes an important contribution to studies of American overseas military basing policy and US security assistance; he also adds to an increasingly rich literature on the strategic significance of the Persian Gulf to America's global security . . . Geoffrey Gresh's new book is an excellent start to what is certain to be an important and long-running national security debate."

"[T]he dearth of studies highlighting the history and politics of US basing in the Middle East, and the Gulf Coast region in particular, remains surprising given the great strategic importance of this area. Geoffrey Gresh's Gulf Security and the US Military: Regime Survival and the Politics of Basing is therefore a welcome addition to the literature. To my knowledge, it is the first in-depth account of base politics devoted to this region . . . Scholars, policymakers, and general readers will have much to learn from this fine book."

"[The book] provides useful lessons learned for those involved with current and future negotiations with any Gulf nation. Every USAF colonel and above who thinks he or she may be involved in such decisions should read this book. It is an essential primer, written in such a way as to be scholarly, yet comprehensible . . . The insight into all that has gone into the 'base life' one will experience and perhaps off-base privileges is certainly worth the effort and time to read this book."

"This book is not just a comprehensive history of the military-strategic relationship between the U.S. and Gulf Cooperation Council countries (GCC) but also a complex analysis of internal and external factors (such as regime survival and state-society relations) that influence the conduct of the GCC towards the American military presence in the Gulf. A welcome addition to security studies broadly defined and which takes the local level seriously."

"Geoffrey Gresh's book, Gulf Security and the U.S. Military, comes at a crucial time when the Middle East is roiling. U.S. bases have served the interests of those in and out of the Gulf. They are affected by domestic politics as much as they are affected by regional politics. Going back to the establishment of U.S. bases in Bahrain, Saudi Arabia and Oman and bringing the reader up to date Gresh gives the reader a vital perspective through which to analyze the U.S. role in the Gulf in these turbulent times. This is essential reading for those interested in US policy in the Gulf, regional and energy politics."

"I do not know of any book that goes into this level of detail about the specific events in the long process by which the US replaced the British as the primary external power in the Gulf. It provides a piece to the puzzle vital for understanding the hot-and-cold strategic duets the United States has played with Saudi Arabia, Bahrain, Oman, and other allies in the region."

—Peter Dombrowski, Professor of Strategy, the US Naval War College

"This powerful and comprehensive look at security in the Arabian Gulf and the US role in creating and sustaining it should be mandatory reading for policy makers. Geoffrey Gresh has written an up-to-the-minute account of how our key friends in the region view their security not only in the Gulf, but the world. Superb!"

"Overall, the analysis provided in the book is extremely valuable to US policy makers and officers in charge of American bases in those regions, as they will find important insights and inspirations from Gresh's book. The lessons from this book can also be of great interest to policy advisors concerned with how the United States today can help countries in the Gulf regions to enhance their national security facing the severe threats from the rise of Islamic State (ISIS) and to reduce the risk of increasing internal security threats for those countries."

Yeo on Gresh, 'Gulf Security and the US Military: Regime Survival and the Politics of Basing'