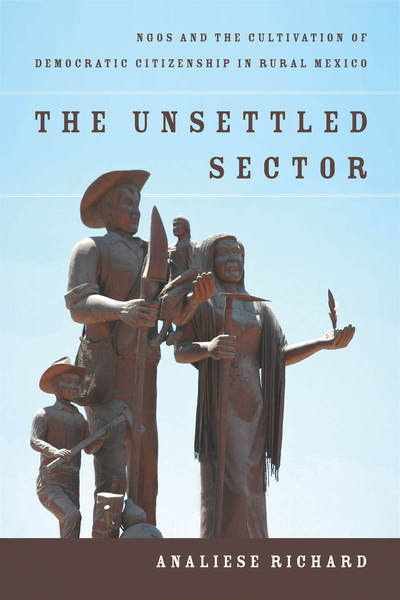 In late twentieth century Mexico, the NGO boom was hailed as an harbinger of social change and democratic transition, with NGOs poised to transform the relationship between states and civil society on a global scale. And yet, great as the expectations were for NGOs to empower the poor and disenfranchised, their work is rooted in much older civic and cultural traditions. Arguably, they are just as much an accomplice in neoliberal governance. Analiese Richard seeks to determine what the growth of NGOs means for the future of citizenship and activism in neoliberal democracies, where a widening chasm between rich and poor threatens democratic ideals and institutions.

Analyzing the growth of NGOs in Tulancingo, Hidalgo, from the 1970s to the present, The Unsettled Sector explores the NGOs' evolving network of relationships with donors, target communities, international partners, state agencies, and political actors. It reaches beyond the campesinos and farmlands of Tulancingo to make sense of the NGO as an institutional form. Richard argues that only if we see NGOs as they are—bridges between formal politics and public morality—can we understand the opportunities and limits for social solidarity and citizenship in an era of neoliberal retrenchment.

Analiese Richard is Associate Professor of Anthropology and International Studies at University of the Pacific.

"The Unsettled Sector brings fresh insight to ongoing debates about citizenship, development, and new forms of local and transnational solidarity. This profound and nuanced examination of cultural transformations in the modes and morals of civic action in rural Mexico reveals how the meanings and practices of democracy are reworked in the context of neoliberalism and the global NGO boom."

"The Unsettled Sector reveals the complex impact of neoliberal implementation on NGOs and the ambiguities and dilemmas they face. Richard carefully incorporates historical and cultural perspectives embodied in the Mexican context, but her analysis is also extremely pertinent to countries in which 'activism is dismissed as uncivil while charity stands in for democratic citizenship.'"

"Richard offers a fresh way of analyzing the impact of NGOs on rural citizenship in postrevolutionary Mexico. The Unsettled Sector is appropriate for undergraduates and will be of interest to scholars of Latin American studies and activists."