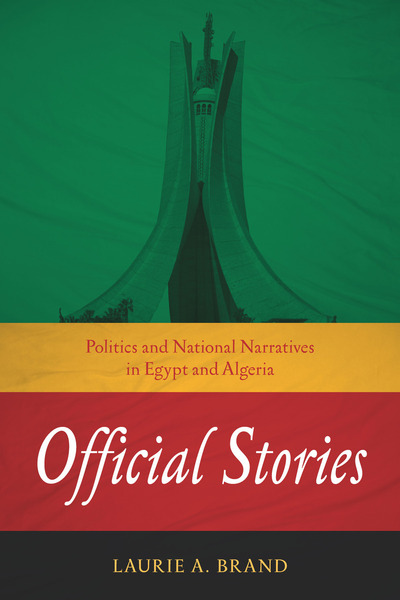 Until the recent uprisings in the Middle East and North Africa, the resilience of authoritarian regimes seemed a fundamental feature of regional politics. While economic, political, and internal security policies are most often considered in discussions of regime maintenance, Laurie Brand introduces a new factor, that of national narratives. Portrayals of a country's founding, identity, and bases of unity can be a powerful strategy in sustaining a ruling elite. Brand argues that such official stories, which are used to reinforce the right to rule, justify policies, or combat opponents, deserve careful exploration if we are to understand the full range of tools available to respond to crises that threaten a leadership's hold on power.

Brand examines more than six decades of political, economic, and military challenges in two of North Africa's largest countries: Egypt and Algeria. Through a careful analysis of various texts—history and religion textbooks, constitutions, national charters, and presidential speeches—Official Stories demonstrates how leaderships have attempted to reconfigure narratives to confront challenges to their power. Brand's account also demonstrates how leaderships may miscalculate, thereby setting in motion opposition forces beyond their control.

Laurie A. Brand is Robert Grandford Wright Professor of International Relations at the University of Southern California and author of Citizens Abroad: Emigration and the State in the Middle East and North Africa (2006).

"[Laurie A. Brand's] book provides us with the valuable findings of enterprising and careful research and will be read with profit by all students of Middle Eastern and North African politics and history, and not only Egypt and Algeria specialists. If, as is likely, it provokes debate, so much the better and, if it leaves work for others to do, it should also encourage some of them to do it."

"This very interesting book looks at how the regimes in Algeria and Egypt have presented themselves to their local audiences over the past half-century or so . . . This book is a must read for students of Middle East politics and for anyone interested in how national narratives are constructed and disseminated."

"An imaginative re-conceptualizing of competing political narratives in the Arab world's two most important countries, Egypt and Algeria. Originally conceived and brilliantly defended, Laurie Brand carefully deconstructs how embattled regimes seek to sustain their legitimacy in the face of political and economic crises. Scholars, specialists, and students of political transitions in authoritarian settings will find Brand's book compelling."

"Both convincing and beautifully written. Laurie Brand does it again with her 'brand' of in-depth, comparative analysis. Meticulously tracing official stories, with fine distinctions from national memory, national myth, national identity, she both illuminates how authoritarian regimes use their soft power to maintain and reproduce themselves, and does it in truly enjoyable fashion. Once you pick up the book, it is hard to put down."

"Brand has produced a thorough, well-contextualized study with far richer detail than can be conveyed in a brief review. It is this detail and the clarity with which Brand presents it that is so valuable. Scholars with in-depth knowledge of both countries will learn new nuances, and students and casual readers will gain a clear overview, of how these regimes have portrayed themselves and sought to define what it means to be Algerian or Egyptian." 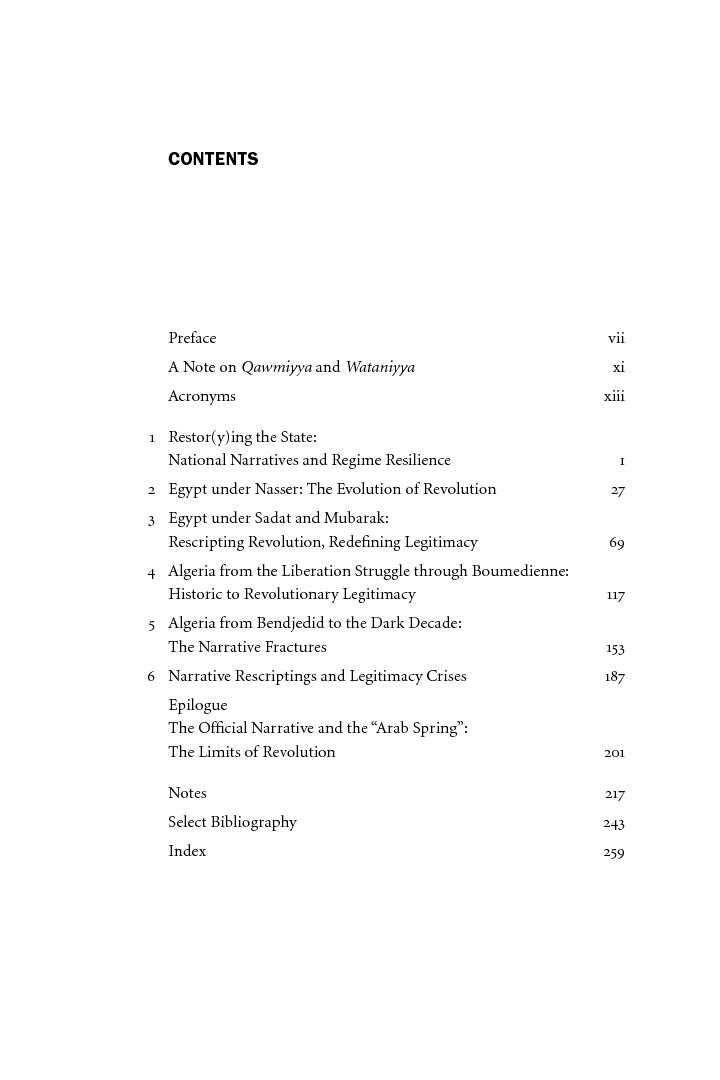 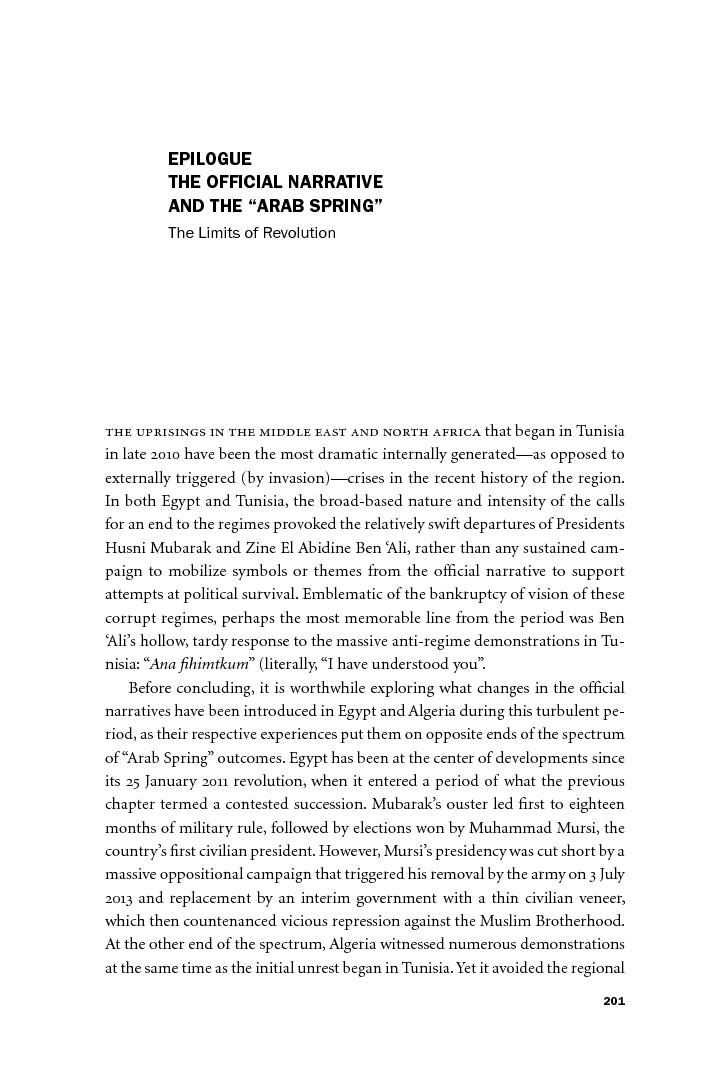 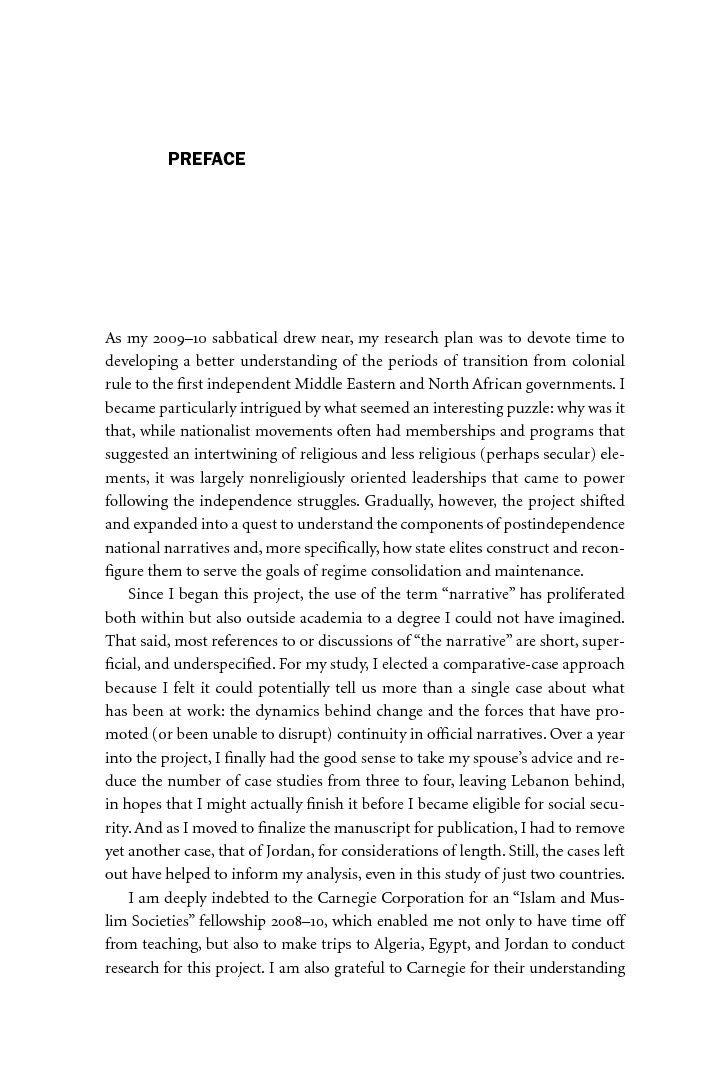 Watch: A Conversation with Laurie A. Brand