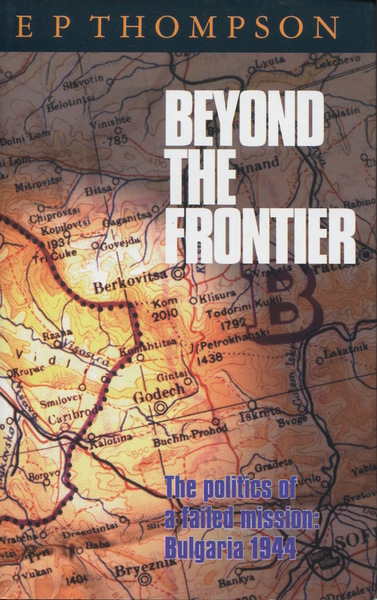 Beyond the Frontier
The Politics of a Failed Mission: Bulgaria 1944
E. P. Thompson

E. P. Thompson (1924-1993) was one of the preeminent British historians of the second half of the twentieth century; his The Making of the English Working Class (1964) is arguably the most influential work of British history published during that period. In the present work, originally presented as a set of lectures at Stanford University, Thompson returned to a question that had been on his mind since the war years, the circumstances surrounding the death of his older brother Frank as a British Liaison Officer with the Bulgarian partisans in 1944.

Though these events, Thompson admitted, constituted only a historical footnote, they afforded him an opportunity to engage larger intellectual and political matters that we now associate with the early beginnings of the Cold War and to illustrate certain elements of historical method. Thompson was here concerned not so much with what is fact and what is interpretation as with "the activities of anti-historians, how sensitive evidence is destroyed or screened, how myths originate, how historical anecdote may simply be a code for ideology, how the reasons of state are eternally at war with historical knowledge."

Early in 1944, a British Special Operations mission was parachuted into Serbia to make contact with a group of Bulgarian partisans operating in the area. Their aim was to arrange air drops of supplies for the partisans and to assist them in extending guerrilla warfare across the frontier into Bulgaria itself. Frank Thompson was head of the British mission when it entered Bulgaria with the partisan forces. By the end of May, the entire group had been killed or captured. After a show trial, Frank (though a British officer in uniform) was executed by a firing squad together with the remaining leaders of the partisans and the villagers who had aided them.

The book shows how the status of the actors in this drama—and the respect accorded to them in the decades that followed—varied with changes in the political climate of Europe and the world. It does not simply examine the events themselves, although these are clarified, but also analyzes the politics that lay behind the events, notably the conflicting interests of the "western" and "eastern" allies in supporting the partisans and the British liaison mission.