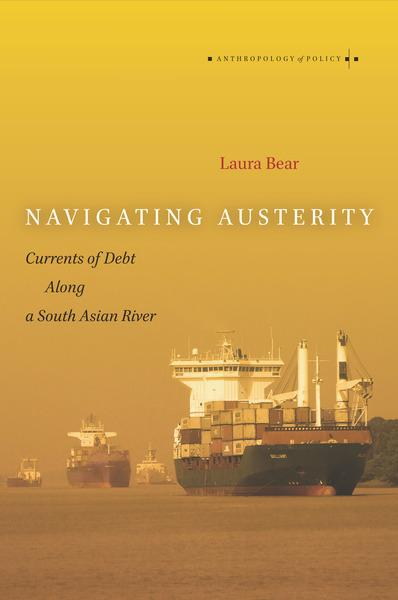 Navigating Austerity addresses a key policy question of our era: what happens to society and the environment when austerity dominates political and economic life? To get to the heart of this issue, Laura Bear tells the stories of boatmen, shipyard workers, hydrographers, port bureaucrats and river pilots on the Hooghly River, a tributary of the Ganges that flows into the Bay of Bengal and Indian Ocean. Through their accounts, Bear traces the hidden currents of state debt crises and their often devastating effects.

Taking the reader on a voyage along the river, Bear reveals how bureaucrats, entrepreneurs and workers navigate austerity policies. Their attempts to reverse the decline of ruined public infrastructures, environments and urban spaces lead Bear to argue for a radical rethinking of economics according to a social calculus. This is a critical measure derived from the ethical concerns of people affected by national policies. It places issues of redistribution and inequality at the fore of public and environmental plans. Concluding with proposals for restoring more just long term social obligations, Bear suggests new practices of state financing and ways to democratize fiscal policy. Her aim is to transform sovereign debt from a financial problem into a widely debated ethical and political issue. Navigating Austerity contributes to policy studies as well as to the understanding of today's global injustices. It also develops new theories about the significance of state debt, speculation and time for contemporary capitalism. Sited on a single body of water flowing with rhythms of circulation, renewal and transformation, this ambitious and accessible book will be of interest to specialists and general readers.

Laura Bear is Professor of Anthropology at the London School of Economics and has carried out fieldwork in India for twenty years. She is the author of two previous books, Lines of the Nation: Indian Railway Workers, Bureaucracy, and the Intimate Historical Self (2007), and a novel, The Jadu House: Intimate Histories of Anglo-India (2000).

"The creation and control of public goods, debt, and enterprise are the topics that animate Navigating Austerity. Laura Bear examines the struggles of working people to find meaning in their environment when economic renewal is starved of public investment. Their profound ethical dilemmas and the religious expression of this condition are brilliantly elucidated."

"In this powerful book, Laura Bear makes a valuable intervention in the contemporary debate on debt and value in the global economy. Based on a deep and compelling ethnography of the complex economic life on the river Hooghly running through Calcutta — a key site in colonial and global economies for centuries — Bear mounts a deeply informed critique of debt, and sovereign debt in particular, as a mere financial matter. Bear shows how even the most basic creation of value and capital in the global economy depends on a complex and local mobilization of labor, affect, resources, cultural meanings and political forces. This book will help set a new agenda for our understanding of capitalism, particularly in its new and old incarnations South Asia and the global South."

"This book is brilliant, powerful, and original. Navigating Austerity offers a nuanced ethnography of river work along the Hooghly River, and the changes between a time of central planning and a more recent time of austerity. It turns around discussions of public debt, arguing that debt's financialization is both recent and wrong-headed. Bear's elegant argument hit me with the force of the 'hidden in plain sight.'"

"Navigating Austerity is a morality tale for our times. Laura Bear has given us a bejeweled ethnography of Indian riverine economics that is also a theoretically sophisticated, ethically coherent, and analytically rigorous study with global and comparative implications. This book will travel far beyond the confines of its immediate ethnographic focus to other disciplines, to other lands, and, one may dare hope, to others who have failed to see the self-destruction that in the name of self-interest they have so heedlessly unleashed."

"[Bear's] engagement with life and work in the riverine economy renders the effects of the global economy, austerity capitalism, and the financialization of sovereign debt both intelligible and terrifying. Beneath the surface of a narrative of decay and inventive regeneration under austerity capitalism is a thoughtful examination of masculinity, materials, workmanship and sacrifice."

"Navigating Austerity provides a richly detailed ethnographic case study from India of what happens when a country follows extreme policy measures intended to support investor confidence in what is ultimately a flawed international financial system."

"Navigating Austerity: Currents of Debt Along a South Asian River comes out of the new Anthropology of Policy series at Stanford University Press, but cuts a path far beyond pioneering work in a field focused on critically analysing state discourse and bureaucratic 'anti-politics'. This lively ethnography populates the policy world with human stories of port engineers, regulatory middlemen, family firms and shipyard workers...[This book] makes a timely entry into anthropological treatments of debt and financialisation, environmental change and development."

London School of Economics
How does austerity affect society and the environment?