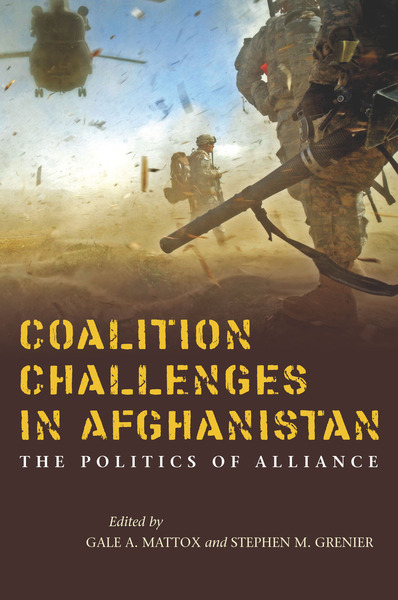 Coalition Challenges in Afghanistan
The Politics of Alliance
Edited by Gale A. Mattox and Stephen M. Grenier

This book examines the experiences of a range of countries in the conflict in Afghanistan, with particular focus on the demands of operating within a diverse coalition of states. After laying out the challenges of the Afghan conflict in terms of objectives, strategy, and mission, case studies of 15 coalition members—each written by a country expert—discuss each country's motivation for joining the coalition and explore the impact of more than 10 years of combat on each country's military, domestic government, and populace.

The book dissects the changes in the coalition over the decade, driven by both external factors—such as the Bonn Conferences of 2001 and 2011, the contiguous Iraq War, and politics and economics at home—and internal factors such as command structures, interoperability, emerging technologies, the surge, the introduction of counterinsurgency doctrine, Green on Blue attacks, escalating civilian casualties, and the impact of the Provincial Reconstruction Teams and NGOs.

In their conclusion, the editors review the commonality and uniqueness evident in the country cases, lay out the lessons learned by NATO, and assess the potential for their application in future alliance warfare in the new global order.

Gale A. Mattox is Professor of Political Science at the US Naval Academy, Adjunct Professor in the Strategic Studies Program at Georgetown University, and Senior Fellow at the American Institute for Contemporary German Studies, Johns Hopkins University.

Stephen M. Grenier is a U.S. Army Special Forces officer serving in the Office of the Secretary of Defense and Adjunct Professor at Johns Hopkins University and George Washington University.

"I consider this to be an extremely important book, helpful to both the general reader and to specialists in other areas. It is the rare book that assesses US policy in three conflict-torn countries, and provides copious background, context, historical review, and lessons learned. Highly recommended."

"Gale A. Mattox and Stephen M. Grenier have brought together an outstanding group of scholars to evaluate the varied contributions of the full range of nations that fought in Afghanistan. This volume fills an important gap in our understanding of America's longest war."

"With their edited volume, Coalition Challenges in Afghanistan, Gale Mattox and Stephen Grenier have made a valuable contribution to the growing literature on the Afghan campaign—and its disappointments This book is written as a valedictory analysis of Afghanistan and as such it succeeds admirably. Yet the true significance of the collection may lie in the fact that while the West has apparently chosen to end a war by withdrawing conventional combat troops, the struggle continues to this day."

Coalition challenges in Afghanistan: the politics of alliance. Edited by Gale Mattox and Stephen Grenier