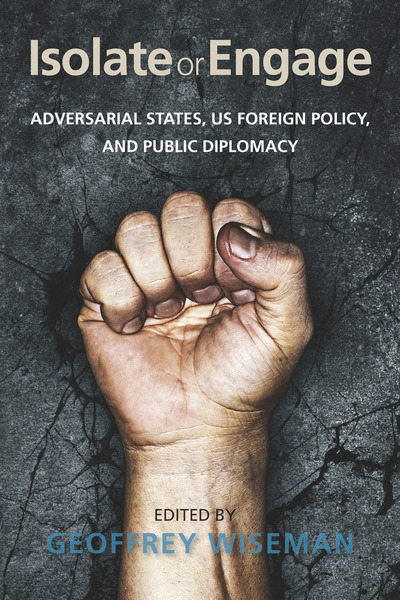 The U.S. government has essentially two choices when dealing with adversarial states: isolate them or engage them. Isolate or Engage systematically examines the challenges to and opportunities for U.S. diplomatic relations with nine intensely adversarial states—China, Cuba, Iran, Libya, North Korea, U.S.S.R./Russia, Syria, Venezuela, and Vietnam: states where the situation is short of conventional war and where the U.S. maintains limited or no formal diplomatic relations with the government.

In such circumstances, "public diplomacy"—the means by which the U.S. engages with citizens in other countries so they will push their own governments to adopt less hostile and more favorable views of U.S. foreign policies—becomes extremely important for shaping the context within which the adversarial government makes important decisions affecting U.S. national security interests. At a time when the norm of not talking to the enemy is a matter of public debate, the book examines the role of both traditional and public diplomacy with adversarial states and reviews the costs and benefits of U.S. diplomatic engagement with the publics of these countries. It concludes that while public diplomacy is not a panacea for easing conflict in interstate relations, it is one of many productive channels that a government can use in order to stay informed about the status of its relations with an adversarial state, and to seek to improve those relations.

Geoffrey Wiseman is Professor of the Practice of International Relations, University of Southern California.

"Geoffrey Wiseman, a leading scholar in diplomatic studies, astutely captures in the title of this his most recent book, Engage or Isolate, a central dilemma for diplomats and policy makers dealing with adversarial states and offers sage advice about the role of public diplomacy in these situations. Very highly recommended."

H-Net
Was There Another Way With Cuba?

The Atlantic
Engaging Iran and Cuba