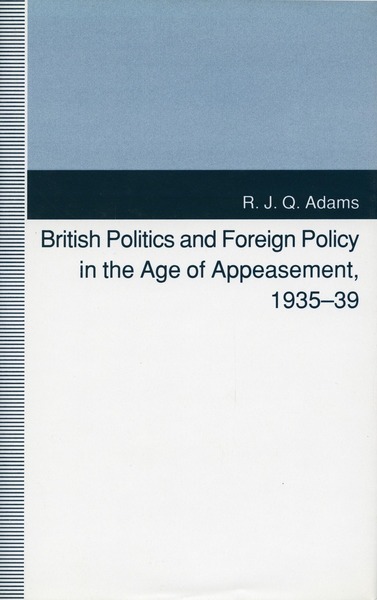 The goal of the British governments in the interwar period was balance among the European great powers—balance which would restore peace as well as a British prosperity based once again upon international trade. In the end, these grim years brought only economic depression and the challenge posed by the fascist dictatorships in Germany and Italy.

In British Politics and Foreign Policy in the Age of Appeasement, 1935-39, historian R.J.Q. Adams examines the policy of appeasement—so frequently praised as realistic and statesmanlike in its day and commonly condemned as wrong-headed and even wicked in ours. In this exciting and thoroughly accessible work, he explains the motivations and goals of the principal policy-makers: Neville Chamberlain, Lord Halifax, Sir John Simon, and Sir Samuel Hoare, and of their major critics: Winston Churchill, Anthony Eden, Duff Cooper, and Sir Robert Vansittart. He discloses the myths which obscure our understanding of the Stresa Front, British rearmament, the Anglo-French alliance and the highest moment of appeasement—Munich.

R.J.Q. Adams is Professor of History at Texas A&M University. He is a Fellow of the Royal Historical Society and is the author of Arms and the Wizard: Lloyd George and the Ministry of Munitions, 1915-16 and The Conscription Controversy in Great Britain, 1900-18 and editor of The Great War, 1914-18: Essays on the Military, Political and Social History of the First World War, as well as many articles, reviews, and papers.