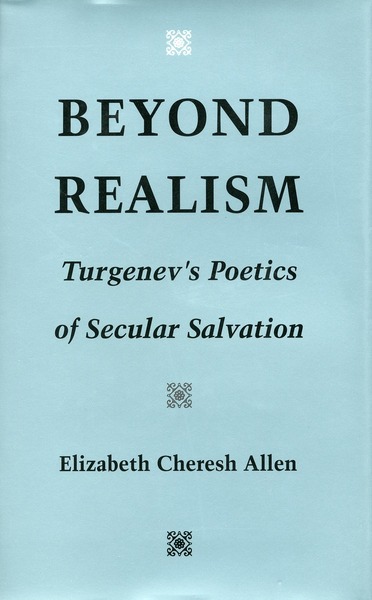 Critical studies of Turgenev have tended to focus on his realistic portrayals of nineteenth-century Russian life and have therefore closely allied Turgenev with the dominant literary movement of that time, Realism. By contrast, this book reveals the non-Realist literary patterns that distinguish Turgenev's fiction. In so doing, it newly uncovers an intricate, imaginative vision of human experience that unites poetics and ethics.

The first part of the book identifies and assesses the ethical values associated with Realism, finding them rooted in the virtues of the traditional rural community. It then elucidates the very different ethical values that inform Turgenev's art, which are rooted not in the virtues of the community but in those of the individual who creatively conceives and independent ethical stance. Turgenev is thus shown to prize art not as a means of merely representing reality but as a means of demonstrating how human lives can be artistically shaped to achieve psychological and moral fulfillment.

In its second part this study addresses various facets of Turgenev's poetics, and the ethical motives behind them, as exemplified in disparate works. One chapter examines how Turgenev orchestrates time and space to illuminate the moral advantages of self-constraint. Another explores Turgenev's adroit management of language to foster imprecision and ambiguity and thereby to prevent explicit articulation of psychologically and morally threatening ideas. Still another chapter concentrates on Turgenev's manipulations of narrative points of view as he displays the benefits of bringing multiple perspectives to bear on painful experience. And a final chapter probes the techniques of characterization Turgenev employs to evaluate varieties of success and failure in pursuit of self-fulfillment. The book concludes by indicating how Turgenev faltered in his last novel precisely by undertaking the Realist enterprise, and how he then reasserted non-Realist aesthetic and ethical principles in his final literary creations, prose poems.

Throughout this book, a series of close reading discloses the very rhythm of Turgenev's thought—the nexus between his aesthetic and moral imaginations. These reading reveal Turgenev's belief in "secular salvation," a belief inspired not by faith in otherworldly redemption but by confidence in individual human beings' ability to save themselves from suffering in this world. This study therefore shows Turgenev to be at once more complex and more creative, more modern and more moral, than readers confining him to the realm of Realism have acknowledged.