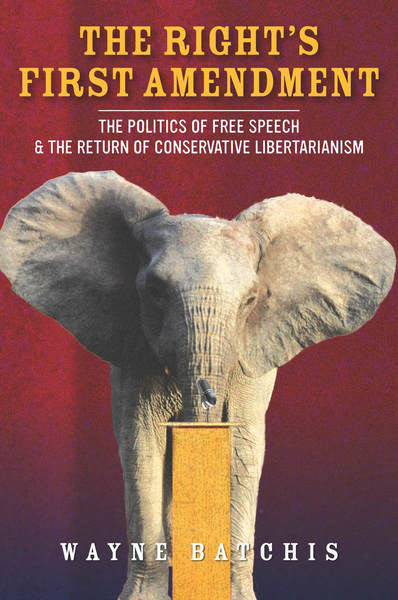 The Right’s First Amendment
The Politics of Free Speech & the Return of Conservative Libertarianism
Wayne Batchis
SERIES: Stanford Studies in Law and Politics

Not so long ago, being aggressively "pro–free speech" was as closely associated with American political liberalism as being pro-choice, pro–affirmative action, or pro–gun control. With little notice, this political dynamic has been shaken to the core. The Right's First Amendment examines how conservatives came to adopt and co-opt constitutional free speech rights.

In the 1960s, free speech on college campuses was seen as a guarantee for social agitators, hippies, and peaceniks. Today, for many conservatives, it represents instead a crucial shield that protects traditionalists from a perceived scourge of political correctness and liberal oversensitivity. Over a similar period, free market conservatives have risen up to embrace a once unknown, but now cherished, liberty: freedom of commercial expression. What do these changes mean for the future of First Amendment interpretation?

Wayne Batchis offers a fresh entry point into these issues by grounding his study in both political and legal scholarship. Surveying six decades of writings from the preeminent conservative publication National Review alongside the evolving constitutional law and ideological predispositions of Supreme Court justices deciding these issues, Batchis asks the conservative political movement to answer to its judicial logic, revealing how this keystone of our civic American beliefs now carries a much more complex and nuanced political identity.

Wayne Batchis is Associate Professor of Political Science at the University of Delaware.

"The Right's First Amendment is an important and very readable guide to the transition from conservative moralism to conservative libertarianism. Batchis expertly documents the powerful impact of this thirty-year transition on constitutional law, politics, and the development of free speech."

"In the realm of 21st century constitutional law, few developments have been as momentous as the increasingly ardent embrace of the First Amendment by conservative jurists and intellectuals. The Right's First Amendment describes, with gusto and fairness, this startling shift in conservative views, one with major impact on the liberty of all Americans."

—Floyd Abrams, author of Friend of the Court: On the Front Lines with the First Amendment

"Wayne Batchis is a lawyer-political scientist who impressively deploys both disciplines' approaches to improve our understanding of conservative politics and constitutional principles. The Right's First Amendment provides a compelling and important explanation of the political effort to define conservatism and, in turn, the conservative effort to define expressive freedom."

"Readers interested in judicial politics – and the development of modern conservatism's thinking and action concerning the freedom of speech and civil liberties more generally – will find this book useful, and thought-provoking along many dimensions."