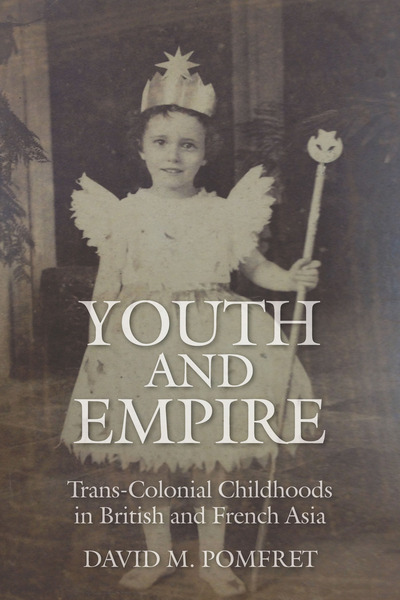 Winner of the 2017 Grace Abbott Best Book Award, sponsored by the Society for the History of Children and Youth.

This is the first study of its kind to provide such a broadly comparative and in-depth analysis of children and empire. Youth and Empire brings to light new research and new interpretations on two relatively neglected fields of study: the history of imperialism in East and South East Asia and, more pointedly, the influence of childhood—and children's voices—on modern empires.

By utilizing a diverse range of unpublished source materials drawn from three different continents, David M. Pomfret examines the emergence of children and childhood as a central historical force in the global history of empire in the late nineteenth and twentieth centuries. This book is unusual in its scope, extending across the two empires of Britain and France and to points of intense impact in "tropical" places where indigenous, immigrant, and foreign cultures mixed: Hong Kong, Singapore, Saigon, and Hanoi. It thereby shows how childhood was crucial to definitions of race, and thus European authority, in these parts of the world. By examining the various contradictory and overlapping meanings of childhood in colonial Asia, Pomfret is able to provide new and often surprising readings of a set of problems that continue to trouble our contemporary world.

David M. Pomfret is Associate Professor of History at the University of Hong Kong and the author of Young People and the European City.

"Brilliantly connecting the local with the global, Pomfret weaves together richly detailed case studies drawn from new archival and primary research. This book will make a major contribution not only to histories of childhood, imperalism, and modern France and Britain, but also to ongoing theoretical scholarship on global empires, space and urban reform, and the history of emotions."

"This book is a striking and original approach to childhood in the British and French Asian colonial world. By examining the various contradictory and overlapping meanings of childhood in colonial Asia, Pomfret is able to provide new and often surprising readings of a set of problems that continue to bedevil our contemporary world."

"Fusing two areas that have attracted a good deal of attention over the last few years but have rarely been integrated—the history of childhood and the history of the European Empires—this pioneering work brings to light a wealth of material from archives and libraries across the globe."

"The uniqueness of Pomfret's research lies largely in his comparative approach, as he moves deftly from French to British colonies, bringing out significant differences in the role that childhood played in the colonial centers of Hong Kong, Singapore, Saigon, and Hanoi....Pomfret argues convincingly that children are made to symbolically stand in for the possible unity and the future of the colonies, while themselves remaining marginal to imperial power....This book is a useful resource for researchers and advanced students in French and British studies with an interest in Asia or the colonial imagination."