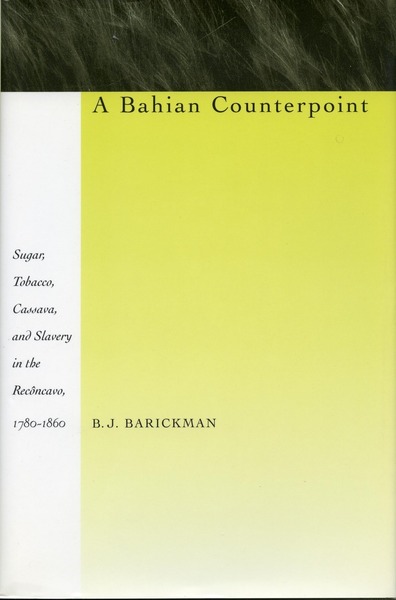 A Bahian Counterpoint
Sugar, Tobacco, Cassava, and Slavery in the Recôncavo, 1780-1860
B. J. Barickman

This is the first study, for any region of colonial or nineteenth-century Brazil, to integrate research on the production and marketing of basic foodstuffs for local needs into an investigation of slavery and export agriculture. It thus forges a link between what have until now been two separate strands of scholarship in the field of Brazilian history, opening new perspectives for understanding how, during more than three centuries, slavery, plantations, and export agriculture shaped social and economic life in Brazil.

This book examines the social-economic history of the region known as the Recôncavo in the province (now state) of Bahia in Northeastern Brazil. In the early nineteenth century, the Recôncavo ranked as one of the oldest and most important slaveholding regions in the Americas and, within Brazil, as a major center of sugar and tobacco production. A Bahian Counterpoint shows that, although often dismissed as peripheral or marginal activities in the literature on Brazil, the production and marketing of foodstuffs for internal consumption played a crucial role in the development of the Recôncavo's slave-based export economy.

The book also systematically compares the use of slave labor, landholding, and agricultural practices in the production of the Recôncavo's three main crops: sugar, tobacco, and cassava. The comparison reveals an agrarian economy where, relying on slave labor, great planters and small farmers alike adapted land use and agricultural practices not only to specific crop requirements, but also to the demands of both overseas and local markets. The adaptations they made created a complex and varied social landscape in a region long thought to be dominated almost exclusively by large plantations. The comparison further reveals striking contrasts between sugar and tobacco. Neither merely another example of export monoculture nor strictly a peasant activity, tobacco farming in the Recôncavo demonstrates that, within slave-based export agriculture, there were alternatives to the plantation.

Both for Brazil and for many other areas of the Americas, A Bahian Counterpoint challenges established arguments about slavery, export agriculture, and the development of an internal economy.

B. J. Barickman is Assistant Professor of History at the University of Arizona.