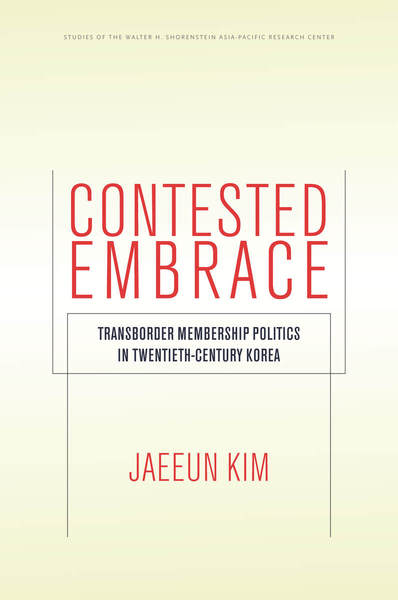 Honorable Mention in the 2018 James B. Palais Prize, sponsored by the Association for Asian Studies (AAS) - Northeast Asia Council.

Scholars have long examined the relationship between nation-states and their "internal others," such as immigrants and ethnoracial minorities. Contested Embrace shifts the analytic focus to explore how a state relates to people it views as "external members" such as emigrants and diasporas. Specifically, Jaeeun Kim analyzes disputes over the belonging of Koreans in Japan and China, focusing on their contested relationship with the colonial and postcolonial states in the Korean peninsula.

Extending the constructivist approach to nationalisms and the culturalist view of the modern state to a transnational context, Contested Embrace illuminates the political and bureaucratic construction of ethno-national populations beyond the territorial boundary of the state. Through a comparative analysis of transborder membership politics in the colonial, Cold War, and post-Cold War periods, the book shows how the configuration of geopolitics, bureaucratic techniques, and actors' agency shapes the making, unmaking, and remaking of transborder ties. Kim demonstrates that being a "homeland" state or a member of the "transborder nation" is a precarious, arduous, and revocable political achievement.

"Contested Embrace sets a new standard in the study of migration and the state. Kim's theoretically agile and ethnographically vivid account shows how ordinary people and governments across Northeast Asia have wrestled over the question of who is Korean, and what that means in practice."

"Contested Embrace is a brilliant and bracing analysis of transborder membership politics. Exhaustively researched and meticulously argued, Jaeeun Kim's book is required reading for anyone interested in modern Northeast Asia, comparative ethnicity and nationalism, and transnational and global studies. It is a great book to think with."

"This impressive work shows that neither instrumentalist nor culturalist views do justice to how states deal with their diaspora communities abroad and brings rare nuance to the vexed "transnationalism" problematic. Allergic to false binaries of many sorts, not least the one of micro v. macro, Contested Embrace is simply good sociology."

"Kim'sContested Embrace presents a commanding account of the long-term macrohistorical and regional interstate dynamics of the Korean transborder membership, mapping twentieth- and twenty-first-century Korean migration and repatriation across East Asia."

"The contributions of Contested Embrace to the literature on nationalism, transnationality, citizenship, and migration are manifold and impressive. In terms of research ambition, scope, and quality of research, this book is a tour de force."

"A groundbreaking work that reshapes the field of international migration with rich, unusual ethnography, a convincing historical account, and a broader theoretical appeal to the study of nationalism, citizenship, and globalization."

"Invoking such concepts as 'the presentation of self' (Goffman) and 'weapons of the weak'(Scott), Kim provides a vivid analysis of migrants' involvement in document forgeries, sham marriages, and other forms of identity fraud, contributing an especially agentic portrayal of the politics of 'who is what.'"

"Contested Embrace uniquely and thoroughly connects the structural changes in the nation-building process, changes in geopolitical orders, and political and economic shifts in East Asia to the micro-analysis of individuals' experiences and negotiations with top-down policies."

"Kim has meticulously utilized both historiographic and ethnographic approaches to dissect and analyze the discourse of belonging on the part of ethnic Koreans caught up in the violent and divisive historical developments in twentieth-century East Asia. Contested Embrace is a seminal work that integrates the historical, political, social, and economic experiences of diasporic Koreans in Japan and China vis-à-vis North and South Korea."