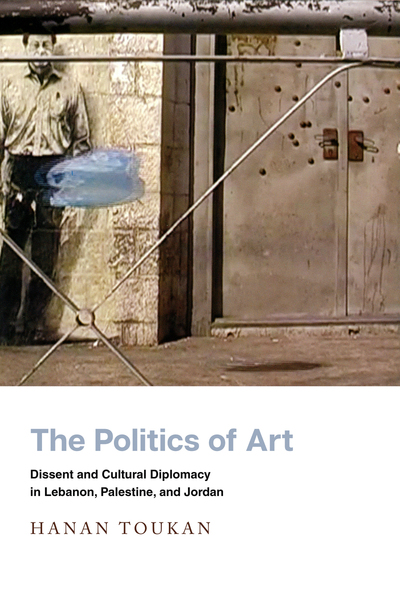 The Politics of Art
Dissent and Cultural Diplomacy in Lebanon, Palestine, and Jordan
Hanan Toukan
SERIES: Stanford Studies in Middle Eastern and Islamic Societies and Cultures

Over the last three decades, a new generation of conceptual artists has come to the fore in the Arab Middle East. As wars, peace treaties, sanctions, and large-scale economic developments have reshaped the region, this cohort of cultural producers has also found themselves at the center of intergenerational debates on the role of art in society. Central to these cultural debates is a steady stream of support from North American and European funding organizations—resources that only increased with the start of the Arab uprisings in the early 2010s.

The Politics of Art offers an unprecedented look into the entanglement of art and international politics in Beirut, Ramallah, and Amman to understand the aesthetics of material production within liberal economies. Hanan Toukan outlines the political and social functions of transnationally connected and internationally funded arts organizations and initiatives, and reveals how the production of art within global frameworks can contribute to hegemonic structures even as it is critiquing them—or how it can be counterhegemonic even when it first appears not to be. In so doing, Toukan proposes not only a new way of reading contemporary art practices as they situate themselves globally, but also a new way of reading the domestic politics of the region from the vantage point of art.

"There are few books out there that bring together a deep, critical knowledge of the arts in the Middle East with theoretical sophistication and shimmering ethnographic observations. Hanan Toukan's The Politics of Art does this abundantly, and it does so in beautiful, absorbing prose, with great care and tenderness."

"The Politics of Art is a game changer. Hanan Toukan brilliantly reveals a critical, often hidden component of art-making in the Middle East: how powerful political and economic interests have shaped what kinds of art are even possible. A brave intervention and required reading for anyone working in the fields of cultural politics and diplomacy."

"In a detailed, revealing, and thought-provoking sociological account, Hanan Toukan explores how a contemporary art scene in Amman, Beirut, and Ramallah grew under the patronage of Western-funded NGOs alongside rising inequality. In these circumstances, might an idealistic commitment to diversity and decolonization produce a new form of homogeneity and domination?"

"The Politics of Art is a dissonant account of how art, without recognition of its ties with power, upholds the very structures it claims to critique."