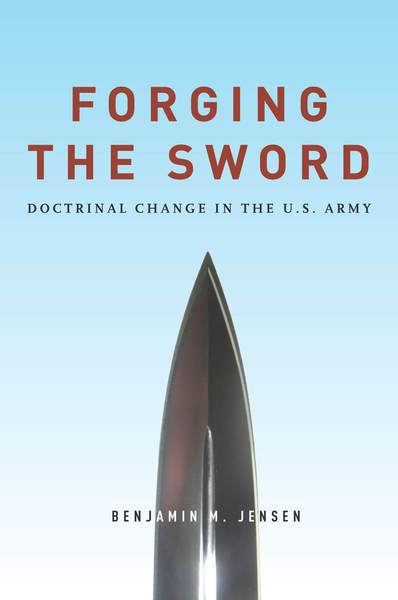 As entrenched bureaucracies, military organizations might reasonably be expected to be especially resistant to reform and favor only limited, incremental adjustments. Yet, since 1945, the U.S. Army has rewritten its capstone doctrine manual, Operations, fourteen times. While some modifications have been incremental, collectively they reflect a significant evolution in how the Army approaches warfare—making the U.S. Army a crucial and unique case of a modern land power that is capable of change. So what accounts for this anomaly? What institutional processes have professional officers developed over time to escape bureaucracies' iron cage?

Forging the Sword conducts a comparative historical process-tracing of doctrinal reform in the U.S. Army. The findings suggest that there are unaccounted-for institutional facilitators of change within military organizations. Thus, it argues that change in military organizations requires "incubators," designated subunits established outside the normal bureaucratic hierarchy, and "advocacy networks" championing new concepts. Incubators, ranging from special study groups to non-Title 10 war games and field exercises, provide a safe space for experimentation and the construction of new operational concepts. Advocacy networks then connect different constituents and inject them with concepts developed in incubators. This injection makes changes elites would have otherwise rejected a contagious narrative.

Benjamin Jensen holds a dual appointment as a Donald L. Bren Chair of Creative Problem Solving at Marine Corps University and as a Scholar-in-Residence at the American University, School of International Service.

"Benjamin Jensen's book is a bold exploration of an important but under-analyzed topic: the evolution of U.S. Army doctrine. He draws on both personal experience and far ranging research to trace the role of incubators and advocacy networks in doctrine development. Jensen's thoughtful conclusions hold important lessons both for the U.S. Army and complex professions in general."

"Benjamin Jensen has produced a book that contains valuable insights concerning the intellectual history of Army doctrine from the post-Vietnam War period to the wars in Afghanistan and Iraq. Of particular value are his observations that junior military officers must embrace their responsibility to think collaboratively about the problem of future armed conflict, and that the most valuable ideas often emerge from the bottom up."

—H.R. McMaster, author of Dereliction of Duty: Lyndon Johnson, Robert McNamara, the Joint Chiefs of Staff, and the Lies that Led to Vietnam

"Forging the Sword is an important contribution to the literature on military innovation. In it, Benjamin M. Jensen challenges the prevailing view of professional soldiers as unimaginative and resistant to change. His is an important argument, one that deserves the attention of scholar and policy maker alike."

"Benjamin Jensen brilliantly explains the sources of doctrinal innovation in the U.S. army, demonstrating how incubators foster problem-driven solutions and advocacy networks spread information throughout the bureaucracy. Covering several decades of Cold War and post-Cold War history, this impressive book will enlighten and inform a wide audience, including civilian and military leaders, scholars and students."

"Benjamin Jensen offers a new and eminently accessible look at a sometimes esoteric topic, military doctrine. Refreshingly, he explains not only what doctrine is or why it changes, but how."

"Clearly articulating the key elements of professional officership, incubators, and advocacy networks, Forging the Sword skillfully documents the critical role of the professional officer and his or her relationship to the service's formal and informal structures to enable change. For anyone considering doctrine's evolution, this is a must-read work. For those examining broader issues of institutional process, Jensen provides a wealth of information on bureaucratic power, personalities, their intersection, and the resulting outcomes. Informative, thought-provoking, and even entertaining in places, Jensen's work possesses a contemporary resonance, making it a valuable read."