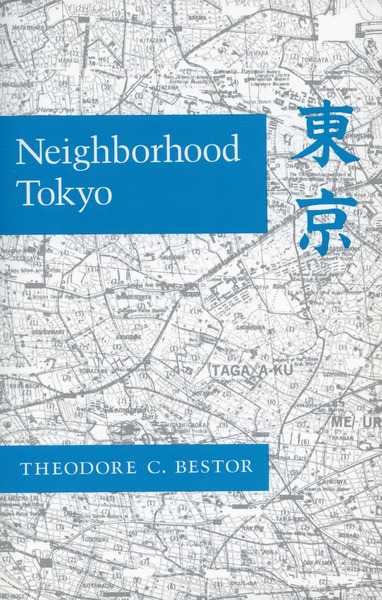 Winner of the 1990 Hiromi Arisawa Memorial Award, sponsored by the AAUP and the Japan Foundation.

Winner of the 1990 Robert Park Award, sponsored by the American Sociological Association.

In the vastness of Tokyo these are tiny social units, and by the standards that most Americans would apply, they are perhaps far too small, geographically and demographically, to be considered "neighborhoods." Still, to residents of Tokyo and particularly to the residents of any given subsection of the city, they are socially significant and geographically distinguishable divisions of the urban landscape. In neighborhoods such as these, overlapping and intertwining associations and institutions provide an elaborate and enduring framework for local social life, within which residents are linked to one another not only through their participation in local organizations, but also through webs of informal social, economic, and political ties.

This book is an ethnographic analysis of the social fabric and internal dynamics of one such neighborhood: Miyamoto-chō, a pseudonym for a residential and commercial district in Tokyo where the author carried out fieldwork from June 1979 to May 1981, and during several summers since. It is a study of the social construction and maintenance of a neighborhood in a society where such communities are said to be outmoded, even antithetical to the major trends of modernization and social change that have transformed Japan in the last hundred years. It is a study not of tradition as an aspect of historical continuity, but of traditionalism: the manipulation, invention, and recombination of cultural patterns, symbols, and motifs so as to legitimate contemporary social realities by imbuing them with a patina of venerable historicity. It is a study of often subtle and muted struggles between insiders and outsiders over those most ephemeral of the community's resources, its identity and sense of autonomy, enacted in the seemingly insubstantial idioms of cultural tradition.