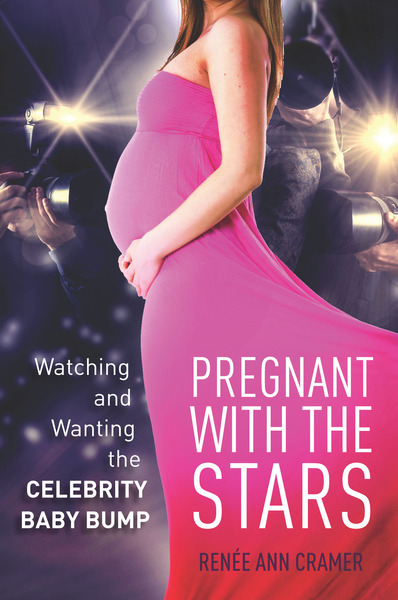 Pregnant with the Stars
Watching and Wanting the Celebrity Baby Bump
Renée Ann Cramer
SERIES: The Cultural Lives of Law

"Check out that baby bump!" Online and print magazines, television shows, and personal blogs are awash with gossip and speculation about pregnant celebrities. What drives our cultural obsession with celebrity baby bumps? Pregnant with the Stars examines the American fascination with, and judgment of, celebrity pregnancy, and exposes how our seemingly innocent interest in "baby bumps" actually reinforces troubling standards about femininity, race, and class, while increasing the surveillance and regulation of all women in our society.

This book charts how the American understanding of pregnancy has evolved by examining pop culture coverage of the pregnant celebrity body. Investigating and comparing the media coverage of pregnant celebrities, including Jennifer Garner, Angelina Jolie, Beyoncé Knowles, Kristen Bell, M.I.A., Jodie Foster, and Mila Kunis, Renée Cramer shows us how women are categorized and defined by their pregnancies. Their stories provide a paparazzi-sized lens through which we can interpret a complex set of social and legal regulations of pregnant women.

Cramer exposes how cultural ideas like the "rockin' post-baby body" are not only unattainable; they are a means of social control. Combining cultural and legal analysis, Pregnant with the Stars uncovers a world where pregnant celebrities are governed and controlled alongside the recent, and troubling, proliferation of restrictive laws aimed at women in the realm of reproductive justice and freedom. Cramer asks each reader and cultural consumer to recognize that the seeing, judging, and discussion of the "baby bump" isn't merely frivolous celebrity gossip—it is an act of surveillance, commodification, and control.

Renée Ann Cramer is Associate Professor and Chair of Law, Politics and Society at Drake University.

"What do celebrity baby bumps, boobs, and booties have to do with the law? In this compelling and creative new book, Renée Cramer suggests that contemporary culture's fascination with these subjects reveals much about the complex web of social and legal regulations that shape our understanding of pregnancy, the body and femininity."

"When people hear I study celebrity, they often ask, 'What's going on with the obsession with celebrity pregnancy and baby bumps?' Finally, I have somewhere to direct them. Pregnant with the Stars takes a nuanced and engaging look at celebrity pregnancy, connecting the baby bump craze to larger issues governing women's bodies and what we expect and demand from them."

—Anne Helen Petersen, Features Writer at BuzzFeed and author of Scandals of Classic Hollywood: Sex, Deviance, and Drama from the Golden Age of American Cinema

"Pregnant with the Stars is as entertaining as it is illuminating. Cramer has a rare gift for drawing our attention to everyday forms of power that occur at the intersection of popular culture, politics and the law and converge in our gaze on women's bodies."

"Americans have voraciously consumed images of gorgeous, famous pregnant bodies—from Demi to Kiera—while ordinary women have officially lost rights, dignity, and safety as fertile persons. Renée Cramer cracks open interpretations of this development, inviting us to consider the consequences of celebrating those beyond our reach, while millions of real women are threatened with ignobility and ignominy."

—Rickie Solinger, author of Reproductive Politics: What Everyone Needs to Know

"Cramer's examination of celebrity pregnancy reminds us that robust analysis can also be wildly fun. Pregnant with the Stars reveals how the pop culture portrayal of pregnant women's bodies undermines equality and deeply-held social values. Readers of all kinds will enjoy the book and want to talk about it—online, at work, in the classroom, and beyond."

"Cramer sees our obsession with pregnant celebrities as a distraction from birth-control politics....She urges women not to let what is an individual experience be influenced by celebrity-pregnancy hype."