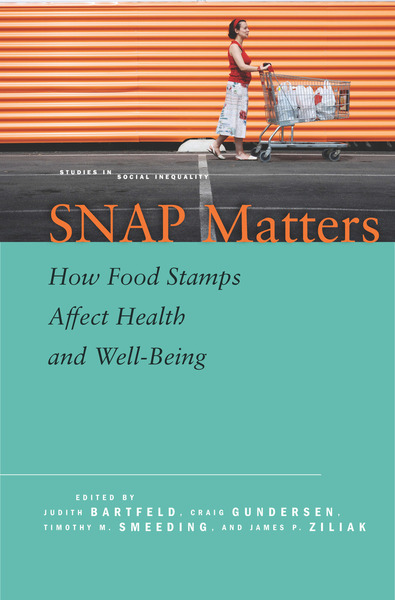 In SNAP Matters, Judith Bartfeld, Craig Gundersen, Timothy M. Smeeding, and James P. Ziliak bring together top scholars to begin asking and answering the questions that matter. For example, what are the antipoverty effects of SNAP? Does SNAP cause obesity? Or does it improve nutrition and health more broadly? To what extent does SNAP work in tandem with other programs, such as school breakfast and lunch? Overall, the volume concludes that SNAP is highly responsive to macroeconomic pressures and is one of the most effective antipoverty programs in the safety net, but the volume also encourages policymakers, students, and researchers to continue examining this major pillar of social assistance in America.

Judith Bartfeld is professor in the School of Human Ecology at the University of Wisconsin–Madison and the Director of the RIDGE Center for National Food and Nutrition Assistance Research at the Institute for Research on Poverty.

Craig Gundersen is the Soybean Industry Endowed Professor of Agricultural Strategy in the Department of Agricultural and Consumer Economics at the University of Illinois.

Timothy M. Smeeding is Arts and Sciences Distinguished Professor of Public Affairs and Economics at the University of Wisconsin–Madison and, from 2008 to 2014, was Director of the Institute for Research on Poverty.

James P. Ziliak is the Carol Martin Gatton Endowed Chair in Microeconomics and the Founding Director of the Center for Poverty Research at the University of Kentucky.

"SNAP (formerly the Food Stamp Program) is unique among American social programs in being available to anyone in need. However, despite its size and scope, we have known remarkably little about its effectiveness. This timely volume brings attention to recent research showing the program's effectiveness in promoting health, particularly among infants and children. As such, it provides vital input to the national debate over the future of SNAP."

"The vast literature on the associations between poverty and child development neglects the role of the SNAP program in helping low-income children reach their full potential. This important volume summarizes the best available evidence and sparks a new research agenda on this critically important tool for fighting child poverty."

"This volume, edited and written by some of the top safety net researchers, is a treasure because it contains between two covers everything you could want to know about the vital food stamp program. Such an important and versatile program deserves an excellent volume of information and analysis. Now it has one."

"An outstanding synthesis of the research on the SNAP program. This is required reading for anyone interested in gaining a thorough understanding of SNAP and its participants; factors related to its growth; and its impact on poverty, health and nutrition, food insecurity, obesity, and much more."

"This extraordinary volume is a must-read for anyone wishing to understand the SNAP program. One can only hope that as policymakers consider changes to the SNAP program and the broader safety net, they will draw on evidence and insight in this book."