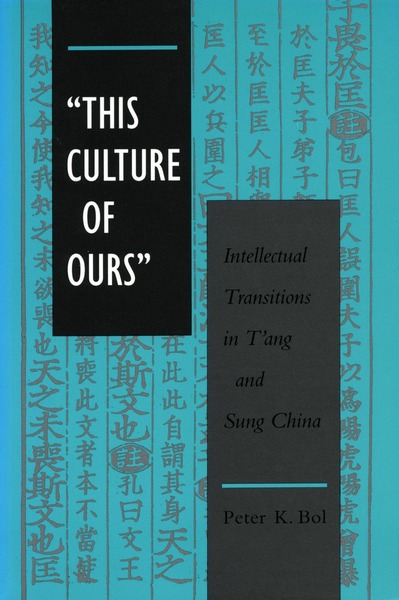 ‘This Culture of Ours’
Intellectual Transitions in T’ang and Sung China
Peter K. Bol

This book traces the shared culture of the Chinese elite from the seventh to the twelfth centuries. The early T'ang definition of 'This Culture of Ours' combined literary and scholarly traditions from the previous five centuries. The late Sung Neo-Confucian movement challenged that definition. The author argues that the Tang-Sung transition is best understood as a transition from a literary view of culture - in which literary accomplishment and mastery of traditional forms were regarded as essential - to the ethical orientation of Neo-Confucianism, in which the cultivation of one's innate moral ability was regarded as the goal of learning. The author shows that this transformation paralleled the collapse of the T'ang order and the restoration of a centralized empire under the Sung, underscoring the connection between elite formation and political institutions.

“Bol’s book is a major accomplishment, intellectual history at its best. Every serious student of the history and the literary and intellectual culture of traditional China will want to read Bol’s study and will need to take it into account.” —Choice