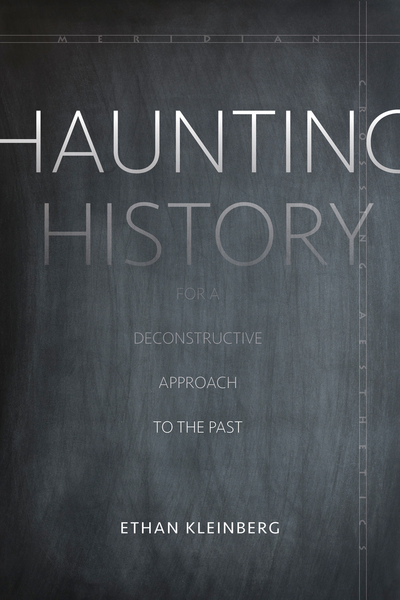 Haunting History
For a Deconstructive Approach to the Past
Ethan Kleinberg
SERIES: Meridian: Crossing Aesthetics

This book argues for a deconstructive approach to the practice and writing of history at a moment when available forms for writing and publishing history are undergoing radical transformation. To do so, it explores the legacy and impact of deconstruction on American historical work; the current fetishization of lived experience, materialism, and the "real;" new trends in philosophy of history; and the persistence of ontological realism as the dominant mode of thought for conventional historians.

Arguing that this ontological realist mode of thinking is reinforced by current analog publishing practices, Ethan Kleinberg advocates for a hauntological approach to history that follows the work of Jacques Derrida and embraces a past that is at once present and absent, available and restricted, rather than a fixed and static snapshot of a moment in time. This polysemic understanding of the past as multiple and conflicting, he maintains, is what makes the deconstructive approach to the past particularly well suited to new digital forms of historical writing and presentation.

Ethan Kleinberg is Professor of History and Letters at Wesleyan University and the author of Generation Existential: Heidegger's Philosophy in France, 1927–1961 (2005).

"Ethan Kleinberg's book is the first deconstructive treatment of the recent debate over the nature of historical time, the presence of the past in the present, and the nature of historicity characteristic of modernity. It's also a healthy response to all of those critics of deconstruction who never bothered reading Derrida sufficiently deeply. It is serious. It is stimulating. It is original."

"In this eagerly awaited and important book, Ethan Kleinberg makes an impassioned and convincing plea for historians to reflect on the theory and practice of their discipline. Inspired by Derrida and deeply immersed in the traditions of historical scholarship, he argues that a rigorous understanding of the past shows why it is necessarily open to continual revision."

"[I]f we want to continue engaging in the project of history, then we need to appreciate how, beyond the enlightenment project of knowing it, the nineteenth century project of progressively realizing it, and the twentieth century's fragmentation of it, we are in effect haunted by the past....It is to the young historian that this book will be of most value, the historian in the making, preparing to devote herself to exploring the past with intelligence and imagination, a decision she made very likely out of this sense of a haunting past"

Theses on Theory and History Booklet