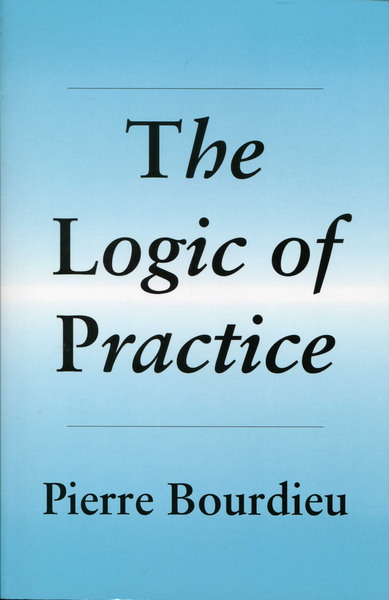 The Logic of Practice
Pierre Bourdieu Translated by Richard Nice

In this, his fullest statement of a theory of practice, Bourdieu both sets out what might be involved in incorporating one's own standpoint into an investigation and develops his understanding of the powers inherent in the second member of many oppositional pairs—that is, he explicates how the practical concerns of daily life condition the transmission and functioning of social or cultural forms.

The first part of the book, "Critique of Theoretical Reason," covers more general questions, such as the objectivization of the generic relationship between social scientific observers and their objects of study, the need to overcome the gulf between subjectivism and objectivism, the interplay between structure and practice (a phenomenon Bourdieu describes via his concept of the habitus), the place of the body, the manipulation of time, varieties of symbolic capital, and modes of domination.

The second part of the book, "Practical Logics," develops detailed case studies based on Bourdieu's ethnographic fieldwork in Algeria. These examples touch on kinship patterns, the social construction of domestic space, social categories of perception and classification, and ritualized actions and exchanges.

This book develops in full detail the theoretical positions sketched in Bourdieu's Outline of a Theory of Practice. It will be especially useful to readers seeking to grasp the subtle concepts central to Bourdieu's theory, to theorists interested in his points of departure from structuralism (especially fom Lévi-Strauss), and to critics eager to understand what role his theory gives to human agency. It also reveals Bourdieu to be an anthropological theorist of considerable originality and power.