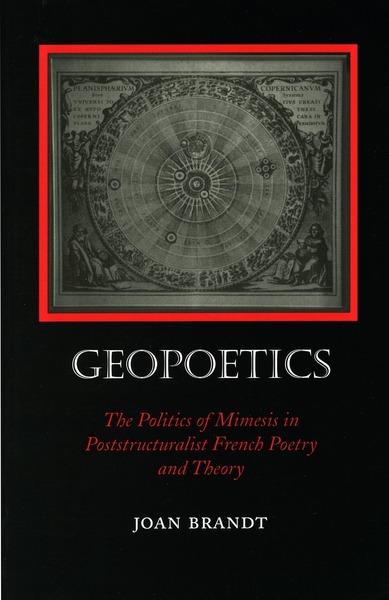 By focusing on the problematic of mimesis—in its linguistic, psychoanalytical, and cultural incarnations—this book argues, in opposition to those who stress the political inadequacies of the French poststructuralists' "privileging" of language, that what leads to a theoretical or practical apoliticism is not the emphasis on language and mimetic representation. Rather, it is the failure to examine closely the relationship between mimesis and politics that closes off the possibility of articulating an adequate response to any form of political imperative.

To make this point, the book begins by considering the "revolution in poetic language" of the late 1960's and early 1970's waged by the politically motivated group of poets and theorists associated with the French journal Tel Quel. It examines the impact of its political radicalism on the writings of the major theoretician of the Tel Quel group, Julia Kristeva, and on the work of the most important Tel Quel poets, Marcelin Pleynet and Denis Roche. It also examines the writings of those more closely associated with deconstruction, whose resistance to the highly charged political rhetoric of the period led many critics to denounce the deconstructive approach for its failure to come to terms with the sociopolitical.

In an effort to respond to those who claim that deconstruction's focus on language and textuality constitutes a denial of history and the political, the author considers deconstructive theory and poetry in the context of Tel Quel's ultimate repudiation of its own revolutionary project. She argues—through readings of the theoretical texts of Philippe Lacoue-Labarthe, Jean-Luc Nancy, and Jacques Derrida, as well as the "deconstructive" poetics of Edmond Jabès—that the deconstructive approach, with its radical interrogation of traditional notions of the mimetic, presents possibilities for a reintegration of the political that, in many respects, exceeds the more highly politicized strategies of the Tel Quel group itself.

Joan Brandt teaches French in the Cooperative Program in Modern Languages at the Claremont Colleges.