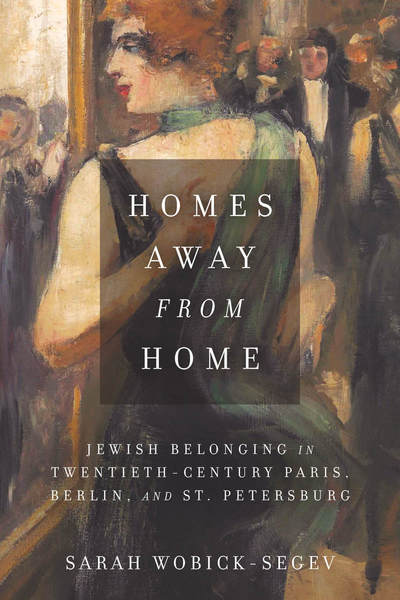 Shortlisted for the 2019 Vine Canadian Jewish Book Awards, sponsored by the Koffler Centre of the Arts.

How did Jews go from lives organized by synagogues, shul, and mikvehs to lives that—if explicitly Jewish at all—were conducted in Hillel houses, JCCs, Katz's, and even Chabad? In pre-emancipation Europe, most Jews followed Jewish law most of the time, but by the turn of the twentieth century, a new secular Jewish identity had begun to take shape.

Homes Away From Home tells the story of Ashkenazi Jews as they made their way in European society in the late nineteenth and twentieth centuries, focusing on the Jewish communities of Paris, Berlin, and St. Petersburg. At a time of growing political enfranchisement for Jews within European nations, membership in the official Jewish community became increasingly optional, and Jews in turn created spaces and programs to meet new social needs. The contexts of Jewish life expanded beyond the confines of "traditional" Jewish spaces into sites of consumption and leisure, sometimes to the consternation of Jewish authorities. Sarah Wobick-Segev argues that the social practices that developed between 1890 and the 1930s—such as celebrating holydays at hotels and restaurants, or sending children to summer camp—fundamentally reshaped Jewish community, redefining and extending the boundaries of where Jewishness happened.

Sarah Wobick-Segev is a Postdoctoral Research Fellow at the Richard Koebner Minerva Center for German History at the Hebrew University of Jerusalem.

"Drawing on a stunning array of sources, Sarah Wobick-Segev transports readers through the spaces and places of Jewish life in three European cities, showing the centrality of new sites of leisure and consumption to modern Jewish identities and sensibilities. A fresh and original contribution to several fields, Homes Away from Home challenges the once intractable divide between Eastern and Western European experiences, showing how Jews and Jewish communities responded to the opportunities and challenges of modernity."

"Sarah Wobick-Segev's brilliant combination of spatial history with how Jews felt about these spaces offers readers an entirely new lens through which to understand evolving Jewish identities in Western, Central, and Eastern Europe."

"Wobick-Segev explores the ways in which modern Jews slowly became members of European society while maintaining a Jewish identity. She focuses on 19th- and 20th-century Jews in France, Germany, and Russia, and her study is a welcome addition to the immense literature on Jewish assimilation. Working through both primary and secondary sources in German, French, and Yiddish, Wobick-Segev examines ways that Jewish communities met the twin challenges of the modern world: greater acceptance by society was accompanied—seemingly paradoxically—by increased hostility. She covers a lot of ground cogently and concisely. Recommended."

"[A] pleasure to read. Engaging and well-written, Homes Away from Home draws from a wide array of archival source materials in different languages, shedding light on urban Jews forging modern identities and sensibilities. It is a welcome addition to the fields of Jewish Studies, urban and spatial history."