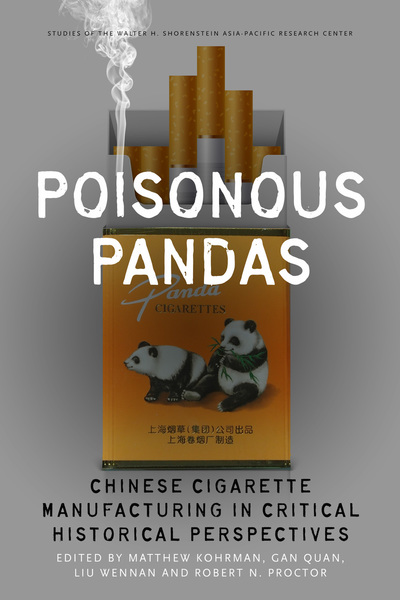 A favorite icon for cigarette manufacturers across China since the mid-twentieth century has been the panda, with factories from Shanghai to Sichuan using cuddly cliché to market tobacco products. The proliferation of panda-branded cigarettes coincides with profound, yet poorly appreciated, shifts in the worldwide tobacco trade. Over the last fifty years, transnational tobacco companies and their allies have fueled a tripling of the world's annual consumption of cigarettes. At the forefront is the China National Tobacco Corporation, now producing forty percent of cigarettes sold globally. What's enabled the manufacturing of cigarettes in China to flourish since the time of Mao and to prosper even amidst public health condemnation of smoking?

In Poisonous Pandas, an interdisciplinary group of scholars comes together to tell that story. They offer novel portraits of people within the Chinese polity—government leaders, scientists, tax officials, artists, museum curators, and soldiers—who have experimentally revamped the country's pre-Communist cigarette supply chain and fitfully expanded its political, economic, and cultural influence. These portraits cut against the grain of what contemporary tobacco-control experts typically study, opening a vital new window on tobacco—the single largest cause of preventable death worldwide today.

Matthew Kohrman is Associate Professor of Anthropology at Stanford University.

Gan Quan is the Director of Tobacco Control of the International Union Against Tuberculosis and Lung Disease.

Liu Wennan is Editor for the Institute of Modern History at the Chinese Academy of Social Sciences.

Robert N. Proctor is Professor of the History of Science at Stanford University.

"Poisonous Pandas is a stupendous and long overdue achievement. From the Communist Base areas in the 30s and 40s, through the Great Leap, the early reform period and into the present, we learn how the cigarette in China has been developed, represented in advertising and popular culture, gendered and sexed, mythologized and celebrated, argued and fought over. Here, cigarettes become agents of capital and enormous profit, ubiquitous in nearly all aspects of life, and ultimately monstrous. This painstaking unmasking of one of the world's greatest death machines sets a new bar for the study of health regimes and afflicted bodies, for the very study of life and death, in China and beyond."

"This important volume documents the historical and cultural foundations of the world's most massive epidemic: the devastating impact of cigarette smoking in China today. Focusing on cigarette production and consumption over the last century, the authors and editors show how deeply embedded tobacco is in the most basic economic and cultural structures of contemporary China, and how difficult it will be to excise this State-run industry and its addictive, deadly product. Nonetheless, they offer opportunities and hope for stemming this global tragedy."

"This book is a tour de force—delivering insights on how the world's largest tobacco corporation has emerged, provocations for reimagining public health interventions, and a scholarly platform for future research."

"This is a factually detailed, erudite, and imperative historical record of tobacco in China, compiled by experts in the field from both inside and outside China. It is at times technical, and at other times personal, poignant and philosophical. It does not mince its words as it looks both backwards and forwards in time."

"Poisonous Pandas does a brilliant job of untangling the nightmare of cigarette manufacturing in China—for the first time, readers see clearly how the industry was built, and how much damage it continues to do to the world's most populous nation."

"Part cultural and social history of tobacco in China and part backdrop to the urgent health crisis it has caused, this is a terrific collaboration exploring the social, cultural, political, and fiscal arrangements of one of the most deadly products in one of the world's most populous nations. It is the most definitive and comprehensive study of China's tobacco problem to date."

"[T]he authors of this groundbreaking volume have produced a wide-ranging and highly readable collection of papers on the political economy of Chinese cigarette manufacturing over the past 100 years...Kohrman and co-authors take a more critical approach to understanding why the Chinese Government has historically elevated this deadly product to unprecedented heights."––Kelley Lee, The Lancet