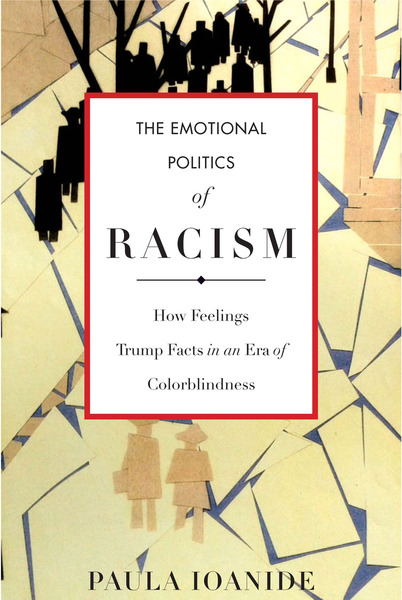 The Emotional Politics of Racism
How Feelings Trump Facts in an Era of Colorblindness
Paula Ioanide
SERIES: Stanford Studies in Comparative Race and Ethnicity

One of Flavorwire's Ten Must-Read Academic Books for 2015

With stop-and-frisk laws, new immigration policies, and cuts to social welfare programs, majorities in the United States have increasingly supported intensified forms of punishment and marginalization against Black, Latino, Arab and Muslim people in the United States, even as a majority of citizens claim to support "colorblindness" and racial equality. With this book, Paula Ioanide examines how emotion has prominently figured into these contemporary expressions of racial discrimination and violence. How U.S. publics dominantly feel about crime, terrorism, welfare, and immigration often seems to trump whatever facts and evidence say about these politicized matters.

Though four case studies—the police brutality case of Abner Louima; the exposure of torture at Abu Ghraib; the demolition of New Orleans public housing units following Hurricane Katrina; and a proposed municipal ordinance to deny housing to undocumented immigrants in Escondido, CA—Ioanide shows how racial fears are perpetuated, and how these widespread fears have played a central role in justifying the expansion of our military and prison system and the ongoing divestment from social welfare. But Ioanide also argues that within each of these cases there is opportunity for new mobilizations, for ethical witnessing: we must also popularize desires for justice and increase people's receptivity to the testimonies of the oppressed by reorganizing embodied and unconscious structures of feeling.

Paula Ioanide is Associate Professor at the Center for the Study of Culture, Race & Ethnicity at Ithaca College.

"The Emotional Politics of Racism is a sustained act of ethical witnessing. Paula Ioanide offers fresh insights into the relationship between social order and alienation, showing the interrelation of explanatory and affective modes that perpetuate gendered racial hierarchy. A must read for all students of racial capitalism."

—Barbara Tomlinson, University of California, Santa Barbara, author of Feminism and Affect at the Scene of Argument: Beyond the Trope of the Angry Feminist

"Paula Ioanide's deft reading of a series of racialized spectacles explores the complex economy of fears, longings, and fantasies that structure the white public imagination. She persuasively demonstrates the need for a new framework of political analysis centered on shared affect, feelings, and desires."

Ethical Witnessing in a Time of Racial Phobia

Flavorwire
Racism Is the Central Hindrance to Democratization