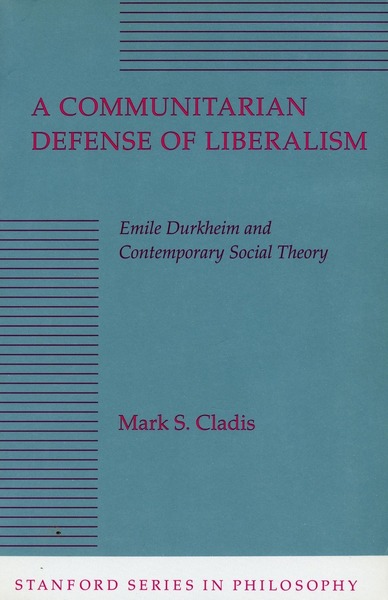 'Community, ' 'tradition, ' 'the individual', stand out prominently in today's intellectual landscape. In social and political theory and in religious studies they figure in the ongoing debates between liberals (champions of the individual) and communitarians (champions of the common good). With these debates and their potential conflict in mind, the author has constructed a timely reading of Emile Durkheim that captures the benefits associated with both liberalism and communitarianism. The book explores fundamental issues concerning freedom, rights, authority, public moral education, the relation between the public and the private, and the role of social criticism in democracies. Isolating the merits and liabilities of both liberal and communitarian theories, the author demonstrates that we need not be in the position of having to choose between them.

"This is an interesting and provocative reading of Durkheim that sheds new light on the contemporary relevance of his work and offers new and complex material for the debate over social theory. It is well written, and the style is lively."

"Cladis's central argument is that Durkheim's sociology—until recently dismissed as conservative dogma—provides valuable insights for the contemporary debates between liberals and communitarians. . . . With the novel insight that liberalism is a viable moral tradition and not the mere antithesis of tradition, Durkheim resolved a problem that had plagued Descartes, Kant, and Rousseau."