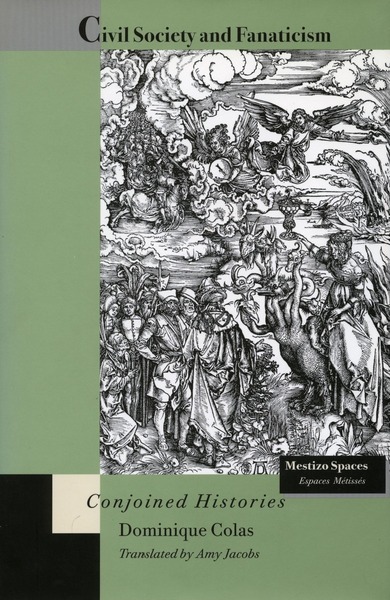 Luther and Calvin applied the term fanatic to those who sought to destroy civil society in order to establish the Kingdom of God, the "false prophets" and their followers who, early on in the Reformation, began smashing images in churches and rebelling against princes. Civil Society and Fanaticism is organized around this seminal moment of religious and political iconoclasm, an outburst of hatred against mediations and representation.

The author shows that civil society and fanaticism have been consistently present as conjoined notions in Western political thought since the sixteenth century, underlining the link between two principles that are constitutive of that thought: dualism—between the City of God and the earthly city, between civil society and the state—and the validity of representation.

In what is both a study of the evolution of the two interrelated concepts and a critique of critiques of representation, the author draws upon an impressive range of works, including texts by Aristotle and Baudelaire, the medieval theology of Giles of Rome and the humanist thought of the Reformer Philipp Melanchthon, the political philosophies of Spinoza, Leibniz, and Rousseau, Kant's reflections on the sublime, and Marx's critique of Hegel. At the same time, he discusses a varied group of fanatics or people stigmatized as such: the first Anabaptists, the Shiite sect of the Assassins, the French Protestant Camisards, the Bolsheviks. An original analysis of Lenin's political theory and practice sheds new light on the antagonism between totalitarianism and the law-governed state identified with civil society.

The author's approach is multidisciplinary, proceeding at different moments from lexicographical, sociological, psychoanalytic, and philosophical methods and analysis. The book also makes vivid use of iconology by reproducing and interpreting a series of works by Albrecht Dürer, whose art and theory of representation, it is argued, were opposed to the destruction not only of images but of civil society.

Dominique Colas is Professor at the Paris Institute of Political Studies. The French edition of this work was awarded a special mention for the Premio Europeo Amalfi.