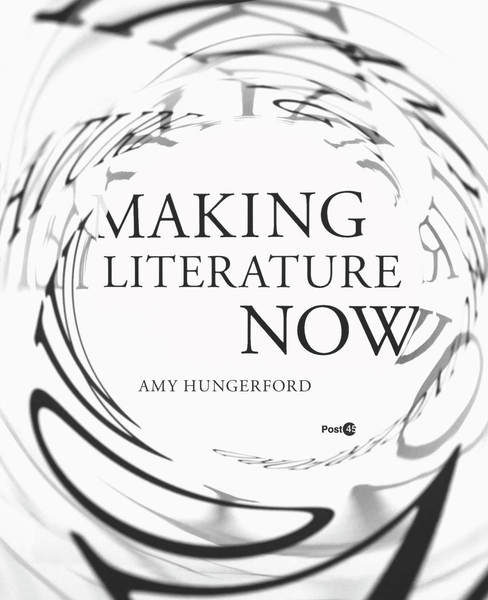 How does new writing emerge and find readers today? Why does one writer's work become famous while another's remains invisible? Making Literature Now tells the stories of the creators, editors, readers, and critics who make their living by making literature itself come alive. The book shows how various conditions—including gender, education, business dynamics, social networks, money, and the forces of literary tradition—affect the things we can choose, or refuse, to read.

Amy Hungerford focuses her discussion on literary bestsellers as well as little-known traditional and digital literature from smaller presses, such as McSweeney's. She deftly matches the particular human stories of the makers with the impersonal structures through which literary reputation is made. Ranging from fine-grained ethnography to polemical argument, this book transforms our sense of how and why new literature appears—and disappears—in contemporary American culture.

Amy Hungerford is Dean of the Humanities and Professor of English at Yale University.

"I value Hungerford's value for readers and, as her reader, I pay it forward: Making Literature Now is worth your attention."

"It's rare for literary criticism to bring news. But Making Literature Now is that decisive book that tells you things you want to know about the circumstances and conditions of writing today, even while it guides you through theoretical issues and conflicts with a friendly and ingenious intelligence. Hungerford's brilliant portraits of editors and writers, behind-the-scenes ethnography, and pointed inquiries make this THE book from which future literary histories will be written."

—Mark Greif, author of The Age of the Crisis of Man

"[T]he real challenge – perhaps the defining challenge of contemporary literary studies – is that we ourselves are part of the field, implicated in its specific regimes of value and prestige. It is a challenge inadequately addressed even by some of the best recent scholarship, but one which Making Literature Now brilliantly brings to the forefront of debate."

"Amy Hungerford's Making Literature Now will make thought-provoking reading for anyone interested in the politics and paradoxes of the contemporary literary culture industry. "

"After launching a much-needed conversation about a literary field lately transformed by technology and global capitalism, Making Literature Now ends by urging scholars to recognize the transformations around them and not to relinquish their voices."

"Hungerford sees the "social" world and "making" of contemporary literature in a theoretically unique and self-consciously "daunting" way.[She] raises the bar on accounts of how literature is made and how we tell the story of little magazines."––Jeffrey Di Leo, Orbit

The Chronicle of Higher Education
Recommended