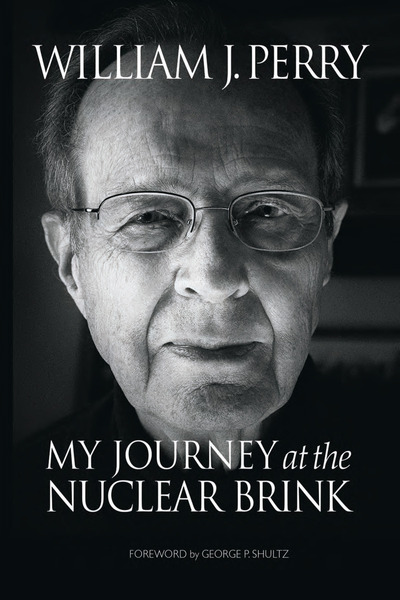 My Journey at the Nuclear Brink
William J. Perry

My Journey at the Nuclear Brink is a continuation of William J. Perry's efforts to keep the world safe from a nuclear catastrophe. It tells the story of his coming of age in the nuclear era, his role in trying to shape and contain it, and how his thinking has changed about the threat these weapons pose.

In a remarkable career, Perry has dealt firsthand with the changing nuclear threat. Decades of experience and special access to top-secret knowledge of strategic nuclear options have given Perry a unique, and chilling, vantage point from which to conclude that nuclear weapons endanger our security rather than securing it.

This book traces his thought process as he journeys from the Cuban Missile Crisis, to crafting a defense strategy in the Carter Administration to offset the Soviets' numeric superiority in conventional forces, to presiding over the dismantling of more than 8,000 nuclear weapons in the Clinton Administration, and to his creation in 2007, with George Shultz, Sam Nunn, and Henry Kissinger, of the Nuclear Security Project to articulate their vision of a world free from nuclear weapons and to lay out the urgent steps needed to reduce nuclear dangers.

"Perry, more technocrat than politician, emphasizes his efforts to prevent nuclear war in this sincere and nontriumphalist memoir."

"William Perry's dedicated service to our nation spans generations, and this remarkable book documents a lifetime of achievements that have made America stronger and safer. In these pages, you will have an insider's look at the acute tensions of the Cold War and the expansive opportunities that emerged when it ended. Dr. Perry's experiences demonstrate why we must do everything we can to reduce the dangers of nuclear proliferation. You will be inspired by the impact that one gifted individual can have on the most pressing national security challenges that we face."

"Bill Perry has the highest A to E ratio (accomplishments to ego) of anyone I have ever known. His vision and foresight have made America safer, stronger and more secure. He has lived General Omar Bradley's dictum: 'The way to win an atomic war is to make certain it never starts.' Everyone interested in protecting the future of our nation and planet should read this book and learn from Bill's experience."

"Perry's authoritative memoir...is a clear, sobering and, for many, surprising warning that the danger of a nuclear catastrophe today is actually greater than it was during that era of U.S.-Soviet competition.a significant and insightful memoir and a necessary read."

"In clear, detailed but powerful prose, Perry's new book, My Journey at the Nuclear Brink, tells the story of his seventy-year experience of the nuclear age. Beginning with his firsthand encounter with survivors living amid 'vast wastes of fused rubble' in the aftermath of World War II, his account takes us up to today when Perry is on an urgent mission to alert us to the dangerous nuclear road we are traveling."

"Perry has long been one of the more strenuous advocates for confronting the dangers of the nuclear age, and his engaging memoir explains why."

My Journey at the Nuclear Brink

WBEZ Worldview
Perry: I Have No Doubt There Are ISIS Cells In The U.S.