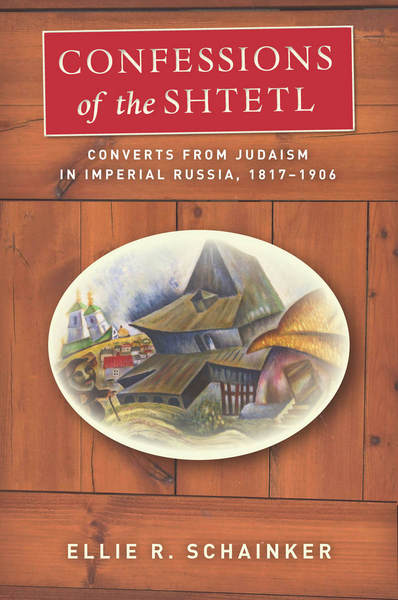 Winner of the 2017 National Jewish Book Awards in the category of Writing Based on Archival Material, sponsored by the Jewish Book Council.

Over the course of the nineteenth century, some 84,500 Jews in imperial Russia converted to Christianity. Confessions of the Shtetl explores the day-to-day world of these people, including the social, geographic, religious, and economic links among converts, Christians, and Jews. The book narrates converts' tales of love, desperation, and fear, tracing the uneasy contest between religious choice and collective Jewish identity in tsarist Russia. Rather than viewing the shtetl as the foundation myth for modern Jewish nationhood, this work reveals the shtetl's history of conversions and communal engagement with converts, which ultimately yielded a cultural hybridity that both challenged and fueled visions of Jewish separatism.

Drawing on extensive research with conversion files in imperial Russian archives, in addition to the mass press, novels, and memoirs, Ellie R. Schainker offers a sociocultural history of religious toleration and Jewish life that sees baptism not as the fundamental departure from Jewishness or the Jewish community, but as a conversion that marked the start of a complicated experiment with new forms of identity and belonging. Ultimately, she argues that the Jewish encounter with imperial Russia did not revolve around coercion and ghettoization but was a genuinely religious drama with a diverse, attractive, and aggressive Christianity.

"The corner of Russian Jewish life opened up by this unsentimental, lucid work is, on the whole, startlingly new. Ellie Schainker shows herself to be a prodigiously clear-headed historian in a study that encompasses Russian imperial law as well as everyday life with its choices made of a medley of desperation, expediency, conviction and, not infrequently, love."

"This important contribution to the history of imperial Russia and its Jewish subjects explores religious borderlines through riveting case histories. Ellie Schainker provides a far more nuanced account of the relationship between Jews and their neighbors in Russian villages than any scholarship to date. Confessions of the Shtetl illuminates the role of conversion in the context of the kahal, of women as active participants, and of local governments and Jewish subjects as they struggle to overcome religious ambiguities."

"What makes this book so novel and stimulating is its investigation into the very concept of "Jew" vs. "Christian" and showing how the blurring of confessional lines caused by conversion forced official and everyday individuals to react, sometimes in surprising ways. For anyone interested in European history, the intricacies of religious and inter-ethnic toleration, and of course Jewish studies, this book is highly recommended."

"This book continues on the promising path of recent scholarship which explores the various ways that Jews became modern. Such multiplicities often feature dyads like community and society, tradition and change, religion and secularism, East and West. Confessions of the Shtetl pushes beyond these categories to reexamine the Jewish encounter with Imperial Russia from 1817 to 1906."

"Nuanced and well researched, with newly released material, this book strives to remain non-judgmental toward a painful subject in religious history, while raising issues of national identity. Recommended for academic libraries with Jewish or Russian Studies collections."

"Confessions of the Shtetl is an impressive accomplishment. It is exhaustively researched and clearly written, and it productively melds distinct literatures on everyday life, religious studies, and state policy....[I]t will be indispensable to scholars and upper-level graduate students in both Russian history and Jewish studies."

"Schainker's book is scholarly yet readable; her prose is clear and her arguments are well substantiated from an array of Russian archival sources....[T]his book is a valuable contribution to a variety of subfields: Russian history, modern Jewish history, history of Russian Orthodoxy, borderlands studies, history of missions, religious studies, and history of empire and religion."

"Ellie R. Schainker's study of conversion from Judaism over nearly a century of Russian history applies new approaches drawn from recent work on Imperial Russian history and on conversion in Western European countries, such as France and Germany, to produce a notably original picture of provincial Jewish life....Schainker's book is an important contribution to the understanding of how Jews who adhered to the traditional faith, or who on the other hand did not, or indeed on the third hand vacillated between these different positions, reflected the altering sensibilities and categories of the Russian Empire and the country's shifting political realities....It is a major achievement....Schainker has created an unexpected picture of late Imperial Russian Jewish society that deserves wide and scrupulous attention."

"[This] rich study combines a sophisticated understanding of religion with a careful study of recent scholarship in many subfields of Jewish studies and Russian history and archival materials to tell the story of an important but overlooked chapter in the history of Russian Jewry in the nineteenth century."

Confessions of the Shtetl