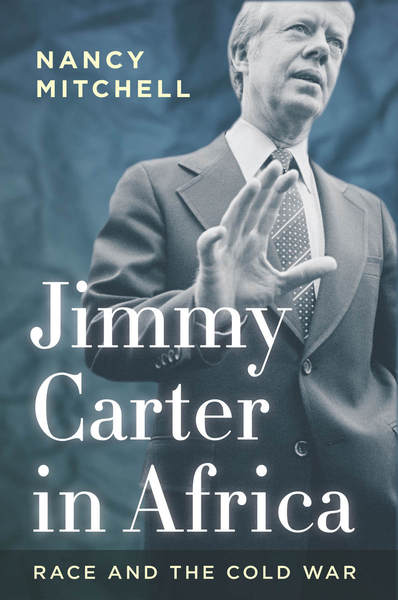 Winner of the 2016 Douglas Dillon Award, sponsored by the American Academy of Diplomacy.

Winner of the 2017 Robert H. Ferrell Book Prize, sponsored by the Society for Historians of American Foreign Relations (SHAFR).

In the mid-1970s, the Cold War had frozen into a nuclear stalemate in Europe and retreated from the headlines in Asia. As Gerald Ford and Jimmy Carter fought for the presidency in late 1976, the superpower struggle overseas seemed to take a backseat to more contentious domestic issues of race relations and rising unemployment. There was one continent, however, where the Cold War was on the point of flaring hot: Africa.

Jimmy Carter in Africa opens just after Henry Kissinger's failed 1975 plot in Angola, as Carter launches his presidential campaign. The Civil Rights Act was only a decade old, and issues of racial justice remained contentious. Racism at home undermined Americans' efforts to "win hearts and minds" abroad and provided potent propaganda to the Kremlin. As President Carter confronted Africa, the essence of American foreign policy—stopping Soviet expansion—slammed up against the most explosive and raw aspect of American domestic politics—racism.

Drawing on candid interviews with Carter, as well as key U.S. and foreign diplomats, and on a dazzling array of international archival sources, Nancy Mitchell offers a timely reevaluation of the Carter administration and of the man himself. In the face of two major tests, in Rhodesia and the Horn of Africa, Carter grappled with questions of Cold War competition, domestic politics, personal loyalty, and decision-making style. Mitchell reveals an administration not beset by weakness and indecision, as is too commonly assumed, but rather constrained by Cold War dynamics and by the president's own temperament as he wrestled with a divided public and his own human failings. Jimmy Carter in Africa presents a stark portrait of how deeply Cold War politics and racial justice were intertwined.

"Your extraordinary research has resulted in a truly definitive account of one of the most challenging and important aspects of my presidency."

"The research for this book is staggering. It is a model of multiarchival research in many disparate collections in the United States as well as in the archives of numerous other countries. This book will give us a new and much more textured, balanced, and thoughtful portrait of Jimmy Carter as a president and of the foreign policy of his administration."

"The volume's arguments and overall importance can not only change our views of Jimmy Carter's foreign policies and the domestic and foreign pressures he overcame to formulate those policies, but also force us to rethink critical parts of US relations with Africa amidst the historic racial and civil rights events of the 1970s."

"Mitchell is truly pioneering in her effort to include a multitude of African, Latin American, European and even Australian sources in the story of the diplomacy of this period. She also does an excellent job of integrating within her narrative America's domestic racial politics, and their effects on men like Jimmy Carter and Andrew Young. Jimmy Carter in Africa will certainly compel historians to reassess Carter's diplomacy and to recognize both his significant achievements and failures on the African continent."

"The Cold War in Africa has received much less attention than the Cold War in Europe and the Middle East, and Nancy Mitchell has made a significant contribution to rectify this. I am sure that Jimmy Carter in Africa will become the standard work for the Cold War in Rhodesia and Ethiopia/Somalia in the 1970s. This book is an outstanding achievement."

"Nancy Mitchell's brilliant book offers a revolutionary view of Jimmy Carter's foreign policy and a pathbreaking examination of the meaning of détente. A true page turner."

—Piero Gleijeses, author of Visions of Freedom: Havana, Washington, Pretoria, and the Struggle for Southern Africa, 1976-1991

"Mitchell's superb treatment of international maneuvering in Africa in the 1970s delivers the most incisive portrait yet of Carter and other personalities at the top of his administration plus, as a bonus, the best examination to date of Henry Kissinger's discovery of Africa in his last year as secretary of state. An absorbing, important, and entertaining read."

—James G. Hershberg, author of Marigold: The Lost Chance for Peace in Vietnam

"Nancy Mitchell's Jimmy Carter in Africa: Race in the Cold War is a phenomenal addition to the scholarship of the Cold War. Drawing heavily on archival research conducted in the United States, Britain, and South Africa and on documents from Cuba and Zimbabwe, the book presents an in-depth and engaging international history of President Jimmy Carter's foreign policy. Mitchell does a commendable job of providing context, ensuring that the book is readily accessible regardless of a reader's expertise. It is an essential and enjoyable read for any historian interested in the late Cold War or modern Africa."

"Mitchell writes clearly in sweeping away historical judgments she sees as myths, most prominently concerning Jimmy Carter (always a Cold Warrior, in Mitchell's formulation) and his principal advisers. On these questions, her concluding chapter is especially strong. An impressive historical work in every respect." Recommendation: Essential—D. N. Buckaloo, Choice

"Nancy Mitchell's exhaustive study of Jimmy Carter's Africa policies (1977–1981) is based on a vast array of once classified and other archival material augmented by many interviews with those directly involved, including with the 39th president of the US. The result is a wealth of fresh insights into the complexity and importance of this critical period in Africa's history, and of how Carter's leadership strengths, talents and core values were tested to good effect."

"Jimmy Carter in Africa manages to be many books at once. It is a much-needed assessment of Jimmy Carter's foreign policy. It is a multi-archival exploration of an under-researched area of the Cold War. It is also an excellent sketch of the intersection of race and politics in American decision-making. Finally, it is a worthy attempt at understanding the inner workings of Jimmy Carter himself."

"The width and depth of her research is a model that diplomatic historians should aspire to achieve, her writing flows, and she places Carter's Africa policy within the larger context of US foreign policy and politics."

"The luminous writing style, the even tenor with which the author sets out her narrative, her impressive command of the sources, her ability to draw the many different strands together, as well as her persuasive arguments, kept this reviewer riveted from beginning to end. This magisterial book, in short, assuredly deserves a place in any library concerned with international affairs during the Cold War."

"Mitchell's thorough examination of the most significant international relations regarding Africa in the late 1970s, based on mind-boggling research and featuring lively prose and insightful analysis, does not disappoint...Jimmy Carter in Africa offers a robust challenge to those who have denounced Carter as simply a naive peanut farmer who was out of his element during some of the darkest days of the Cold War, and makes a massive contribution to the historiography of U.S. foreign relations in the 1970s...The president profiled powerfully in this epic study is a complex, ambitious, admirable, flawed individual whose one-term in the White House featured several famous shortcomings but arguably notched even more triumphs. All historians interested in U.S. foreign relations during the 1970s must now reckon with this characterization of Carter, and also must read this book by Nancy Mitchell."

"Jimmy Carter in Africa: Race and the Cold War is an extraordinarily well-researched book. This landmark work will make an indelible mark on the historiography of the Carter administration because it contests several of the commonly held narratives of Carter's foreign policy."

"This is a monumental, impressive and thoroughly researched book...it provides a nuanced image of President Carter and compels historians to keep on asking questions. With an impressive list of twenty-eight interviews, archival research in Europe, the United States and Africa, as well as compellingly written prose, Jimmy Carter in Africa is a reference work for anyone interested in the Carter presidency."

The Journal of Blacks in Higher Education
Griffin on Mitchell, 'Jimmy Carter in Africa: Race and the Cold War'