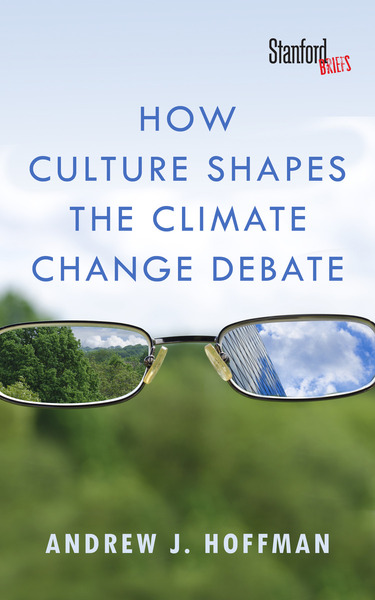 Honorable Mention in the 2016 ONE Book Award, sponsored by the Academy of Management (AOM) - Organizations and the Natural Environment Division.

Though the scientific community largely agrees that climate change is underway, debates about this issue remain fiercely polarized. These conversations have become a rhetorical contest, one where opposing sides try to achieve victory through playing on fear, distrust, and intolerance. At its heart, this split no longer concerns carbon dioxide, greenhouse gases, or climate modeling; rather, it is the product of contrasting, deeply entrenched worldviews. This brief examines what causes people to reject or accept the scientific consensus on climate change. Synthesizing evidence from sociology, psychology, and political science, Andrew J. Hoffman lays bare the opposing cultural lenses through which science is interpreted. He then extracts lessons from major cultural shifts in the past to engender a better understanding of the problem and motivate the public to take action. How Culture Shapes the Climate Change Debate makes a powerful case for a more scientifically literate public, a more socially engaged scientific community, and a more thoughtful mode of public discourse.

"Hoffman, [...], first lays out the psychological and social biases people bring to the climate discussion and then suggest techniques for making that conversation more productive . . . This slender, practical volume will aid anyone hoping to sway climate deniers - whether on Facebook, from a podium, or over a beer."

"Hoffman aggregates and analyzes social scientific data regarding reasons for disagreement, among the US public, about the veracity of the science of climate change. He asserts that public perception of the climate change debate is rooted in avoidance . . . An accessible, intelligent, comprehensive discussion of the impact of cultural values and political economies on the use and acceptance of scientific data and theories . . . Highly recommended."

"This is a well-researched treatment of cultural dimensions of climate science and policy. Hoffman's ability to organize overlapping literatures into a cogent assessment of the current conditions makes for a wonderful book."

"One of the tallest orders of our day is to communicate effectively about global warming. Hoffman shows us how to talk about climate science and policy in ways that depolarize the debate and empower people to form their own opinions based on the scientific risks. This book is a valuable resource, and it comes at the right time."

—Ken Kimmell, President of the Union of Concerned Scientists and former Commissioner of the Massachusetts Department of Environmental Protection

"Hoffman's book is a much-needed analysis of how humans process information—and how that messy mix of reason, emotion, and cultural influence shapes and reinforces our views on global climate change. Important reading for anyone who wants to influence public opinion and public policy on this crucial issue."

"Andrew is so right: 'It's about values, not science.' We learn values and their application from people we trust. So, in order to build trust, we must go to them with credible messengers and affirm their truth. This book offers a clear explanation of why this is so, and what do about it."

"Andrew Hoffman's central message is that more scientific information, while necessary, is insufficient to persuade those who dismiss the reality or seriousness of global warming. Summarizing multiple lines of research, he helps the reader understand the diversity of public responses to climate change and suggests promising ways forward. A very readable and helpful book!"

"Climate change has become a culture war issue and Andrew Hoffman has pointed the way towards a ceasefire. In this compelling discussion, Hoffman offers intriguing, commonsense guidance on how people of all political stripes can move from mudslinging to real, constructive solutions."

"Throughout the book, the author does an exceptional job of clearly summarizing what is a wealth of information, and presents it in a way that the reader can digest with ease by reading this book, the reader will become more aware of the social issues of accepting/rejecting climate change science and be better equipped when entering into dialogue with climate change deniers."

"I can certainly see [this book] being used by high school science teachers and teacher educators in science teacher preparation courses to help students understand the psychological and cultural aspects of the ongoing differences in people's views on climate change, and many other socially contentious issues. Concerned citizens and activists should also be able to mine many interesting and useful nuggets of information and advice from the book that can help them reach across the divide and build crosscutting alliances that are so critical for any meaningful progress to occur on climate change."