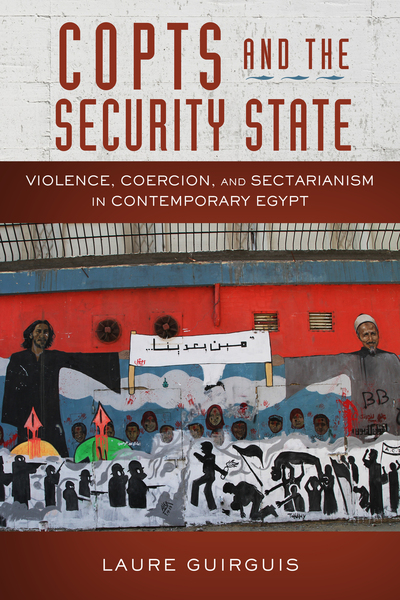 Copts and the Security State combines political, anthropological, and social history to analyze the practices of the Egyptian state and the political acts of the Egyptian Coptic minority. Laure Guirguis considers how the state, through its subjugation of Coptic citizens, reproduces a political order based on religious identity and difference. The leadership of the Coptic Church, in turn, has taken more political stances, thus foreclosing opportunities for secularization or common ground. In each instance, the underlying logics of authoritarianism and sectarianism articulate a fear of the Other, and, as Guirguis argues, are ultimately put to use to justify the expanding Egyptian security state.

In outlining the development of the security state, Guirguis focuses on state discourses and practices, with particular emphasis on the period of Hosni Mubarak's rule, and shows the transformation of the Orthodox Coptic Church under the leadership of Pope Chenouda III. She also considers what could be done to counter the growing tensions and violence in Egypt. The 2011 Egyptian uprising constitutes the most radical recent attempt to subvert the predominant order. Still, the revolutionary discourses and practices have not yet brought forward a new system to counter the sectarian rhetoric, and the ongoing counter-revolution continues to repress political dissent.

Laure Guirguis is a Postdoctoral Fellow at the Orient-Institut, Max Weber Foundation in Beirut.

"Combining theoretical sophistication and vivid narrative, Copts and the Security State lays bare the technologies of power linking authoritarianism and sectarianism in Egypt. Laure Guirguis's analysis of the Coptic community, national politics, and international struggles over minority rights since the 1950s is a must-read for anyone interested in Egypt's Arab Spring, Christian experiences in the Middle East, and the logics of identity discourse and structural violence in modern states."

"In this well-researched, rigorous, and theoretically informed book, Laure Guirguis presents fresh, nuanced thinking on the understudied case of Egypt's Copts. This is an important and profound study of the relationship between the state and the Copts in Egypt."

"Laure Guirguis's book stands out for shining ample light on one of the largest and oldest Christian minorities in the Middle East—the Copts of Egypt.... Guirguis's erudite book is a timely and fundamental contribution, given that minorities are indispensable for diversity and pluralism in this deeply embattled region.... Any reader interested in Egypt, or in minorities in the region, will find the book informative and enlightening."

"Guirguis presents an important and fresh approach to the studies of the largest Christian minority in the Middle East."

"Based on the research presented in this book, Guirguis is quite possibly the best-informed commentator on Coptic affairs writing in English."