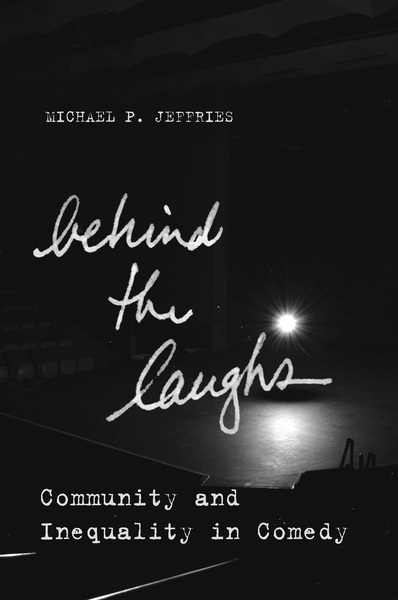 Behind the Laughs
Community and Inequality in Comedy
Michael P. Jeffries
SERIES: Culture and Economic Life

Comedy is a brutal business. When comedians define success, they don't talk about money—they talk about not quitting. They work in a business where even big names work for free, and the inequalities of race, class, and gender create real barriers. But they also work in a business where people still believe that hard work and talent lead to the big time. How do people working in comedy sustain these contradictions and keep laughing?

In Behind the Laughs, Michael P. Jeffries brings readers into the world of comedy to reveal its dark corners and share its buoyant lifeblood. He draws on conversations with comedians, as well as club owners, bookers, and managers, to show the extraordinary social connections professional humor demands. Not only do comedians have to read their audience night after night, but they must also create lasting bonds across the profession to get gigs in the first place. Comedy is not a meritocracy, and its rewards are not often fame and fortune. Only performers who know the rules of their community are able to make it a career.

Michael P. Jeffries is Associate Professor of American Studies at Wellesley College. He is the author of Paint the White House Black: Barack Obama and the Meaning of Race in America (Stanford, 2013) and Thug Life: Race, Gender, and the Meaning of Hip-Hop (2011).

"Melding intimate interviews with astute analysis, Behind the Laughs reveals how the exploitation of comedians is neither funny nor simple. This is a well-researched book that pulls back the curtains on the business of comedy, revealing fascinating stories and troubling inequalities."

"Comedy might be funny, but it's no laughing matter. It's a tough gig, as dependent on networks and connections as on talent and training. Who gets in the door and what happens inside is the subject of Behind the Laughs—Michael Jeffries' smart, original, highly-readable new book about the 'show' and 'business' of comedy. A must-read for anyone interested in the interplay of culture, labor, power, and inequality in the contemporary culture industries."