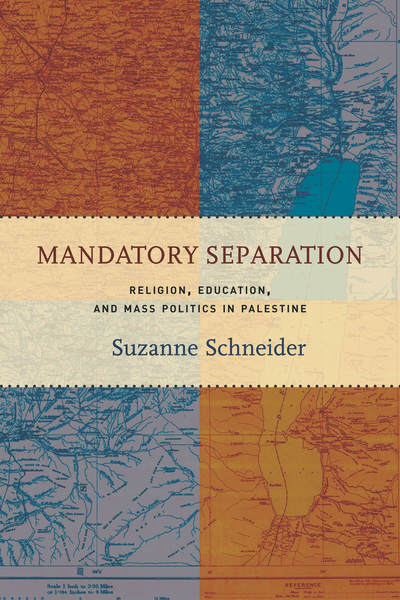 Is religion a source of political stability and social continuity, or an agent of radical change? This question, so central to contemporary conversations about religion and extremism, has generated varied responses over the last century. Taking Jewish and Islamic education as its objects of inquiry, Mandatory Separation sheds light on the contours of this debate in Palestine during the formative period of British rule, detailing how colonial, Zionist, and Palestinian-Muslim leaders developed competing views of the form and function of religious education in an age of mass politics.

Drawing from archival records, school syllabi, textbooks, newspapers, and personal narratives, Suzanne Schneider argues that the British Mandatory government supported religious education as a supposed antidote to nationalist passions at the precise moment when the administrative, pedagogic, and curricular transformation of religious schooling rendered it a vital tool for Zionist and Palestinian leaders. This study of their policies and practices illuminates the tensions, similarities, and differences among these diverse educational and political philosophies, revealing the lasting significance of these debates for thinking about religion and political identity in the modern Middle East.

Suzanne Schneider is the Director of Operations and a Core Faculty member at the Brooklyn Institute for Social Research.

"Mandatory Separation sheds welcome light on a crucial aspect of the British Mandate for Palestine, education for mass politics among both Jews and Muslims. Through this discussion, Suzanne Schneider exposes some of the essential foundations for the decades of conflict in Palestine and Israel that have followed. An important and timely work."

"Brilliantly weaving together British, Zionist, and Palestinian Arab sources, Suzanne Schneider reveals the roots of national politics in the continuities, disjunctures, and struggles among the educators and reformers who saw the schools of Palestine as ground zero in their efforts to construct the ideal modern citizen. Mandatory Separation shows that the intertwining of religion and national politics in Israel/Palestine today is neither new nor eternal."

"The book's novelty lies in its inclusion of education in [its] analytical framework, seeking to examine how two separate national communities operated under and interacted with the same system. Schneider reveals how, instead of promoting understanding, British colonial educational policy adopted and promoted a mandatory separation between the two communities....The book is articulate, straightforward and fun to read—a must read for scholars of the Palestine Mandate, the Zionist-Palestinian conflict, and British colonial history."

"Schneider's book provides a compelling case study of how "religion" was defined and produced in a semi-colonial context in Palestine, and how those efforts connected with earlier labors concerning Judaism in Europe and Islam in the Levant. She also effectively argues that despite the determined portrayal in archival documents of religions as known, stable, and fixed categories, the reality in Palestine was that "religion," and specifically "Judaism" and "Islam," continued to escape and confound fixity. Her focus on education helps elucidate how "religious education" was produced as a particular category of knowledge, in which direct, unmediated access to scripture for the purpose of understanding its edifying moral lessons was privileged over studying the exegetical traditions."

"In Mandatory Separation: Religion, Education, and Mass Politics in Palestine, Suzanne Schneider astutely identifies an underexplored set of questions regarding the nature, political aims, and internal contradictions of British Mandate education policy...Adding to an important body of literature, Mandatory Separation offers new ways of understanding questions of economy, education, and settler colonialism in the study of British Mandate Palestine."