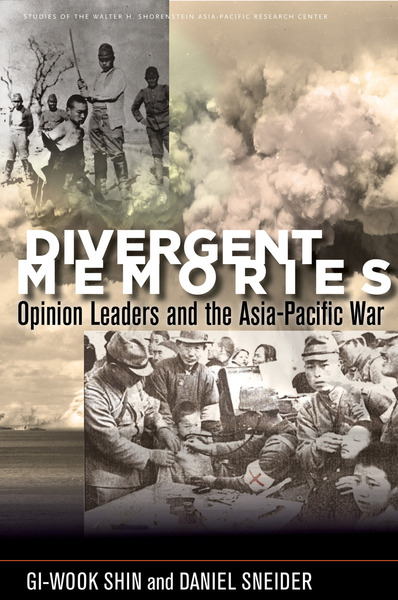 No nation is free from the charge that it has a less-than-complete view of the past. History is not simply about recording past events—it is often contested, negotiated, and reshaped over time. Debate over the history of World War II in Asia remains surprisingly intense, and Divergent Memories examines the opinions of powerful individuals to pinpoint the sources of conflict: from Japanese colonialism in Korea and atrocities in China to the American decision to use atomic weapons against Japan.

Rather than labeling others' views as "distorted" or ignoring dissenting voices to create a monolithic historical account, Gi-Wook Shin and Daniel Sneider pursue a more fruitful approach: analyzing how historical memory has developed, been formulated, and even been challenged in each country. By identifying key factors responsible for these differences, Divergent Memories provides the tools for readers to both approach their own national histories with reflection and to be more understanding of others.

Daniel Sneider is the Associate Director for Research of the Shorenstein Asia-Pacific Research Center at Stanford University, and, with Gi-Wook Shin, is Co-Director of the Divided Memories and Reconciliation Project.

"Divergent Memories is a wonderful contribution that shows how differently Asian wars were perceived by Chinese, Koreans, Japanese, and Americans. It breaks through stereotypes by revealing the nuanced views of opinion leaders in all four countries. By digging deeper, Shin and Sneider help pave the way for replacing hateful passions with compassionate understanding."

"Divergent Memories is a stimulating and comprehensive account of key issues relating to memory and history in East Asia. It offers a series of intriguing and important contrasts between China, Japan and Korea, as well as the US. A valuable new resource for scholars and general readers interested in the past and future of the Asia-Pacific."

"This book is an important counterweight to prevailing tendencies that promote uncritical nationalism and is thus an invaluable resource for this generation's Asian and American youth to gain a critical understanding of their national histories...[T]he authors' non-judgmental approach, coupled with a persistence in pursuing the multiple interpretations and experiences of these traumatic events, provoke a reconsideration of our notions of justice, equality, and humanity within our nationalist thinking."

"[Divergent Memories], a well-written investigation on the legacy of World War II in Asia, greatly contributes to the field of cultural and military history."