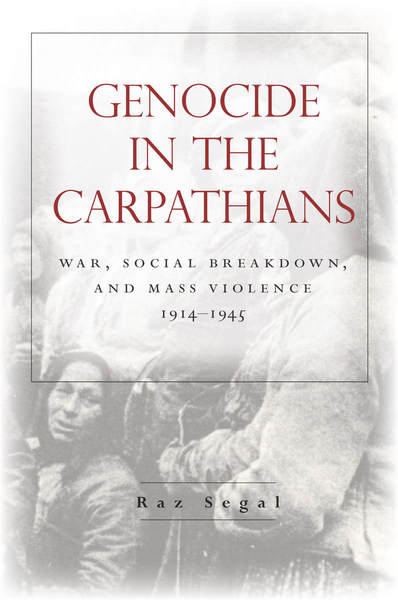 Genocide in the Carpathians presents the history of Subcarpathian Rus', a multiethnic and multireligious borderland in the heart of Europe. This society of Carpatho-Ruthenians, Jews, Magyars, and Roma disintegrated under pressure of state building in interwar Czechoslovakia and, during World War II, from the onslaught of the Hungarian occupation. Charges of "foreignness" and disloyalty to the Hungarian state linked antisemitism to xenophobia and national security anxieties. Genocide unfolded as a Hungarian policy, and Hungarian authorities committed mass robbery, deportations, and killings against all non-Magyar groups in their efforts to recast the region as part of an ethnonational "Greater Hungary."

In considering the events that preceded the German invasion of Hungary in March 1944, this book reorients our view of the Holocaust not simply as a German drive for continent-wide genocide, but as a truly international campaign of mass murder, related to violence against non-Jews unleashed by projects of state and nation building. Focusing on both state and society, Raz Segal shows how Hungary's genocidal attack on Subcarpathian Rus' obliterated not only tens of thousands of lives but also a diverse society and way of life that today, from the vantage point of our world of nation-states, we find difficult to imagine.

Raz Segal is Associate Professor of Holocaust and Genocide Studies and Endowed Professor in the Study of Modern Genocide at Stockton University.

"Relevant to the wider historiography of the Holocaust, genocide in general, and ethnic cleansing in Europe, this book is a very serious contribution to the current debates on these subjects. The critique of the timeless notion of antisemitism as supposedly possessing sufficient explanatory power regarding persecution of the Jews is sound and very productive. This is an exemplary piece of scholarship."

"In offering a novel interpretation of the source material that aspires to go beyond simply filling a hole in the historiography, the author presents many perspectives and draws on an impressive array of primary and secondary sources to construct an engaging narrative."

"Genocide in the Carpathians is an assured and original contribution to the field of modern European history. By looking at the experiences of different groups—Jews, Ruthenians, and Roma—over time and under different regimes, Segal challenges historians to think beyond a German-centric explanation for the Holocaust and towards genocide as a result of the interplay of state-building, ethnic relations, local politics and international diplomacy."

"Segal's work presents a rare example of an integrated narrative of Jewish and eastern European history, something that in effect many of us strive for. It presents a vital reading about the past for the future, in the borderlands and elsewhere."

"...Segal has made a lasting contribution to the fields of Eastern European history, Holocaust studies and inter-ethnic relations in the twentieth century. Upper level undergraduates and others will benefit from his findings."

"Raz Segal's book Genocide in the Carpathians furthers our understanding of mass violence in this part of Europe during World War II in important ways...this is a formidable piece of scholarship, as original and thought-provoking as it is well written."

"Genocide in the Carpathiansis a short book divided into five chapters. Yet within this brief space, Segal's reconstruction of the annihilation of the Jews in Subcarpathian Rus... yields important insights into the relationship between statebuilding and forms of violence, its effects on interethnic relations, and the potential of a microhistorical lens to bring a "fine-grained scrutiny" of these phenomena into focus."

"Genocide in the Carpathians distinguishes itself from many works on the Holocaust in its extensive discussion of the ethnic and political history of this complicated region both before and after the murder of the Jews....[Segal] provides us with a complex monograph that combines empirical narrative with challenging theoretical and methodological questions....This is a book that will be of great value to a variety of scholars, particularly those looking for an insightful and comprehensive regional study of the "long history" of the Holocaust."

"[H]is presentation of the story of the mass murder of the Jews of the Carpathians in a broader context of interethnic relations in the region over a period of three decades offers an interesting and original perspective that is not present in a significant portion of the studies on the Holocaust. These elements of Segal's work are based on in-depth reading of a diverse corpus of sources in a variety of original languages, as well as an impressive mastery of the contemporary theoretical historiographical discourse."

—Guy Miron, Moreshet: Journal for the Study of the Holocaust and Antisemitism

"Superbly written and researched....The author undertakes a valuable and quite substantive task of explicating the historical, political, and social situation of the area between 1914-1945 and covers the historical period meticulously and with great detail."