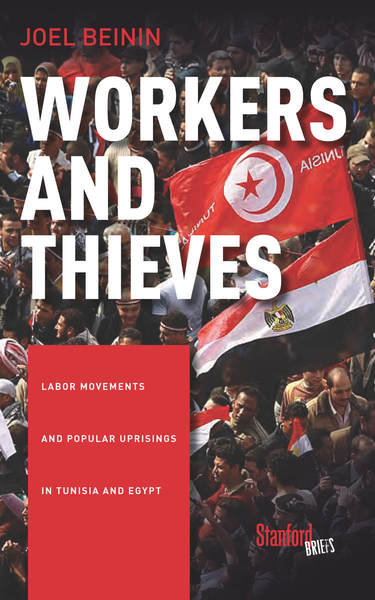 Since the 1990s, the Middle East has experienced an upsurge of wildcat strikes, sit-ins, and workers' demonstrations. Well before people gathered in Tahrir Square to demand the ouster of Hosni Mubarak, workers had formed one of the largest oppositional movements to authoritarian rule in Egypt. In Tunisia, years prior to the 2011 Arab uprisings, the unemployed chanted in protest, "A job is a right, you pack of thieves!"

Despite this history, most observers have failed to acknowledge the importance of workers in the social ferment preceding the removal of Egyptian and Tunisian autocrats and in the political realignments after their demise. In Workers and Thieves, Joel Beinin corrects this by surveying the efforts and impacts of the workers' movements in Egypt and Tunisia since the 1970s. He argues that the 2011 uprisings in these countries—and, importantly, their vastly different outcomes—are best understood within the context of these repeated mobilizations of workers and the unemployed over recent decades.

Joel Beinin is the Donald J. McLachlan Professor of History at Stanford University. He has written or edited ten books, most recently Social Movements, Mobilization, and Contestation in the Middle East and North Africa, co-edited with Frédéric Vairel (Stanford, 2013) and The Struggle for Worker Rights in Egypt (2010). His articles have been published in leading scholarly journals, as well as The Nation, Middle East Report, The Los Angeles Review of Books, South Atlantic Quarterly, Le Monde Diplomatique, and others.

"We know the 'thieves' who plundered Tunisia and Egypt, but few have considered the role of the workers to understand why these countries led the Arab Spring in 2011. Joel Beinin offers this necessary perspective, highlighting in this truly readable and most useful account the clash of workers and thieves that shaped Tunisia's and Egypt's recent history and will determine their future."

—Gilbert Achcar, author of The People Want: A Radical Exploration of the Arab Uprising

"While the crucial role played by workers in Egypt and Tunisia has been woefully overlooked by much of the media and think tank scholarship, Joel Beinin traces the rich and complex history of labor movements and their pivotal role in ongoing struggles for change. To fully understand the forces at play in the turbulent political and social landscapes of Egypt and Tunisia, Workers and Thieves is an invaluable book."

"Joel Beinin's Workers and Thieves ascribes agency to the Arab masses and throws light on the intricacies of the corrupt modern regimes that have ruled Tunisia and Egypt since 1987 and 1981, respectively....What is most interesting about Workers and Thieves is the knowledge one learns about the emergence of the workers' movements in both Tunisia and Egypt during the colonial and postcolonial periods and their role in the anti-colonial movements."

Jadaliyya
Joel Beinin on labor movements in Tunisia and Egypt