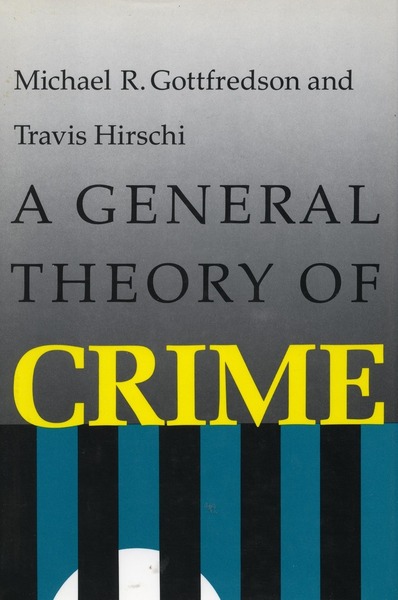 By articulating a general theory of crime and related behavior, the authors present a new and comprehensive statement of what the criminological enterprise should be about. They argue that prevalent academic criminology—whether sociological, psychological, biological, or economic—has been unable to provide believable explanations of criminal behavior.

The long-discarded classical tradition in criminology was based on choice and free will, and saw crime as the natural consequence of unrestrained human tendencies to seek pleasure and to avoid pain. It concerned itself with the nature of crime and paid little attention to the criminal. The scientific, or disciplinary, tradition is based on causation and determinism, and has dominated twentieth-century criminology. It concerns itself with the nature of the criminal and pays little attention to the crime itself. Though the two traditions are considered incompatible, this book brings classical and modern criminology together by requiring that their conceptions be consistent with each other and with the results of research.

The authors explore the essential nature of crime, finding that scientific and popular conceptions of crime are misleading, and they assess the truth of disciplinary claims about crime, concluding that such claims are contrary to the nature of crime and, interestingly enough, to the data produced by the disciplines themselves. They then put forward their own theory of crime, which asserts that the essential element of criminality is the absence of self-control. Persons with high self-control consider the long-term consequences of their behavior; those with low self-control do not. Such control is learned, usually early in life, and once learned, is highly resistant to change.

In the remainder of the book, the authors apply their theory to the persistent problems of criminology. Why are men, adolescents, and minorities more likely than their counterparts to commit criminal acts? What is the role of the school in the causation of delinquincy? To what extent could crime be reduced by providing meaningful work? Why do some societies have much lower crime rates than others? Does white-collar crime require its own theory? Is there such a thing as organized crime? In all cases, the theory forces fundamental reconsideration of the conventional wisdom of academians and crimina justic practitioners. The authors conclude by exploring the implications of the theory for the future study and control of crime.

"[The authors] present a tour de force critique of past research and offer nothing less than a theory that 'explains all crime, at all times.' . . . The intellectual weight of Gottfredson and Hirschi's efforts is . . . a 'must read' . . . provocative, brilliantly argued, and always challenging."

"Most researchers who formulate theories of crime are timid, seeking to explain a small piece of the puzzle (e.g., gangs, female delinquency) at a specific point in time. Not so with Michael Gottfredson and Travis Hirschi. In A General Theory of Crime they present a tour de force critique of the past research and offer nothing less than a theory that "explains all crime, at all times." Normally such a claim would be dimissed by criminologists as wishful thinking, perhaps worse. But the intellectual weight of Gottfredson and Hirschi's efforts is forcing criminologists to take notice and rethink some cherished assumptions. Indeed, this book is a "must read" that is provocative, brilliantly argued, and always challenging."

"This book is well worthy of study and provides a comprehensive and challenging reading of theory and data."

"This book presents powerful arguments, turns many neat phrases, shows that much criminology is confused about its purpose or blind to its inconsistencies, demonstrates the profound implications of its argument for criminology, generally, and for the ways it is studied, specifically, and will almost convince a reader that black is white. . . .This is an excellent book. Nobody interested in crime and deviance can afford to ignore it."

"A General Theory of Crime effectively battles misconceptions about crime, criminals, and appropriate law-enforcement techniques that have all too long dominated thinking in the United States."

"This book is clearly the most thought-provoking general criminological work since James Q. Wilson and Richard Herrnstein's Crime and Human Nature."

"[Out] of the various psychological theories of crime, none has had the comprehensive and cogent nature of this general self-control theory. This book is the most significant reconsideration of crime in decades. . . .Must reading for all social scientists interested in crime."