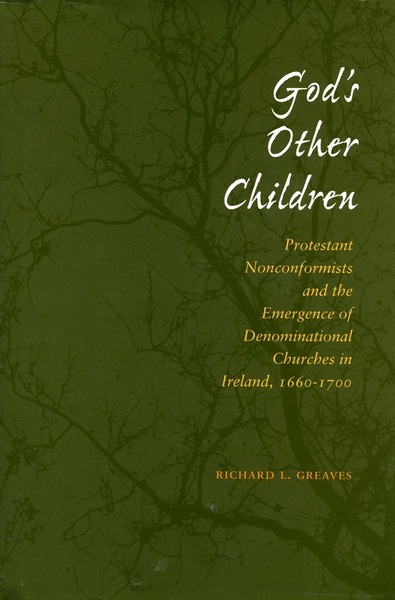 God’s Other Children
Protestant Nonconformists and the Emergence of Denominational Churches in Ireland, 1660-1700
Richard L. Greaves

This is the first full-length work on the fate of the Protestant nonconformists in Ireland following the restoration of the monarchy and the Church of Ireland in 1660. Of the religious groups studied in this book—the Scottish and English Presbyterians, the Congregationalists, the Baptists, and the Friends—only the Scottish Presbyterians had established themselves prior to the revolutionary upheavals of the 1640’s and 1650’s.

The Congregationalists and Baptists arrived in the train of the English armies dispatched to quell the Irish rebellion. Neither group established firm roots outside the military and civilian republicans, and survived only as shadows of their former selves after 1660. This was also the case for the English Presbyterians. In contrast, the Friends, whose work in Ireland began in 1654, crisscrossed the island in their search for converts, and thus established a much stronger foundation on which to build in the later decades of the century. In addition to examining the internal history of these groups from the restoration to the eve of the penal laws in the early eighteenth century, the author also explores the relationships between the civil authorities and the restored state church and the nonconformists.

Only the Scottish Presbyterians and the Friends extended and solidified their bases, and by the end of the century had evolved from sects into denominational churches. Beginning around 1668, both groups underwent a rationalizing process that entailed the development of institutionalized authority, structured systems of discipline, multiregional networks of spiritual leaders, and means to raise funds, found schools, and, in the case of the Friends, establish agencies to censor, publish, and disseminate religious literature. The two groups—their organizations intact, their members yoked together in striking cohesiveness—were thus well positioned to withstand the penal laws in the eighteenth century.

Richard L. Greaves is Robert O. Lawton Distinguished Professor of History at Florida State University. He is author or editor of more than twenty books, including Secrets of the Kingdom: British Radicals from the Popish Plot to the Revolution of 1688-1689 (Stanford, 1992) and Enemies Under His Feet: Radicals and Nonconformists in Britain, 1664-1677 (Stanford, 1990)