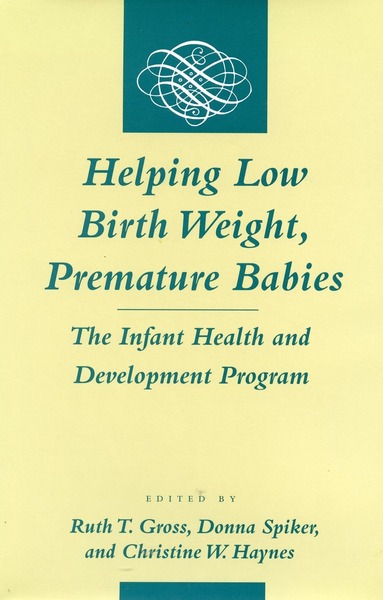 Each year in the United States, 250,000 infants are born too soon, weighing too little. For these low birth weight, premature infants, the future is uncertain, since they are at risk for a variety of serious medical and developmental problems—including behavioral and learning disorders that may have damaging effects for the rest of their lives. The extent to which a comprehensive early intervention program could improve or prevent these adverse outcomes was examined in the Infant Health and Development Program, a randomized controlled trial involving almost 1,000 infants in eight cities in the United States. This book describes in detail the program, its research methodology, the progress of the program, and the results of the clinical trial.

The program was administered by an interdisciplinary team composed of physicians, biostatisticians, child development specialists, and researchers from several disciplines. It was instituted upon the discharge of the infants from the neonatal nursery and was maintained for three years. One-third of the infants were randomly assigned to an intervention group, the remainder to a follow-up group. Infants in both groups received pediatric care and community referral services, but only those in the intervention group participated in a program that included extensive home visits, attendance at a child development center, and group meetings for parents.

The results of the program proved to be clinically important; at age three, the children in the intervention group had significantly higher IQ scores, greater cognitive development, and fewer behavioral problems. The implications of the findings for public policy are equally important, for there is increasing interest in the prevention, early detection, and management of developmental disabilities in children, as evidenced by such legislation as the Education for All Children Act. Strategies to minimize the problems of low birth weight children, with their potential for long-term savings through the prevention of disabilities and their attendant costs, could have significant repercussions in such governmental areas as medical care, education, and social welfare.

"The Infant Health and Development study showed that participation in intensive intervention services during the first three years of life can have significant and positive effects on the cognitive development and behavior of low-birth-weight, premature children. This rich book conveys the message clearly to a worldwide audience of clinicians, researchers, educators, health planners, students, and others interested in child development. They will surely find this book to be an inspiring and precious reference source. Moreover, this is a powerful package with the potential to influence significant changes in health policy."

—The New England Journal of Medicine